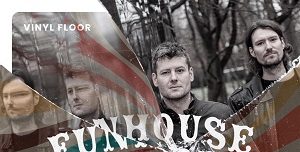 Thomas Charlie and Daniel Pedersen long ago set the bar high for their songwriting collaboration and their latest release under the Vinyl Floor moniker, Funhouse Mirror, raises the stakes without sending them creatively off-course. This fifth full-length studio collection finds the brothers looking back, a bit, to the songwriting direction defining earlier releases. Its orchestral pop scaled small and with a fully integrated intelligence guiding its lyrical content as well.

This might imply a heavy compositional touch. Far from it. The Pedersen brothers long since mastered the ability to leaven their artistic impulses with enough entertainment value to sweeten the listening experience. “Anything You Want” will endear itself to listeners for several reasons but its playful vocal melody helps round off any jagged edges and the assertive percussion sound reflects the overall physical production defining the release.

A lot of listeners are going to enjoy the percussive pairing that Vinyl Floor makes from the drumming and piano. The band keeps a perfect balance between these elements in songs like “Clock with No Hands” and it lends palpable urgency to an otherwise rather poetic number. Poetic, however, in this sense doesn’t mean that the Pedersen brothers lose the plot with high-flown language. The songwriting for tracks such as this, instead, keeps things just right between direct yet graceful use of language alongside inventive musicality. It’s a potent brew.

Listeners should drink deeply from that brew in all its flavors. There are smatterings of a Beach Boys vibe permeating the later track “Dear Apollon” and its melodic sway carries listeners away from the outset. Everything is measured, however, and the brothers’ songwriting never rushes the development of these songs. You’ll finish this particular track satisfied in a way that complete performances bring listeners.

“Ever, the Optimist” shares those qualities as well. It also places Vinyl Floor’s uniquely offbeat sense of humor, wickedly erudite, within a musical context where one attribute strengthens another. It’s the vocal melody and delivery that will snare most of the attention for this one and rightly so as it ranks among the best on this album. The title cut has some of the same power pop inclinations fueling the album opener, expanded on here, and the production puts it in the best possible sonic light. Carnivalesque overtones are clear from the first without Vinyl Floor ever allowing them to overwhelm and cheapen the track. It’s never garish.