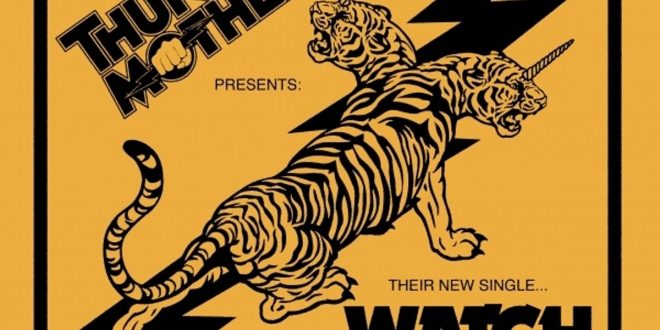 Hard-hitting and ready to shred anything that gets in their path, the guitars in Thundermother’s “Watch Out” summarize why the song is titled the way it is and then some. This isn’t the throwback sludge of ‘70s heavy metal, but the weight of the riffing in this track alone is enough to get just about anyone excited about metallic melodies this summer.

“Watch Out” might be one of many intriguing rock singles out at the moment, but among those coming from an underground source, it’s got the most ferocious tonal presence of any I’ve heard lately.

The bottom end of this song is smothering and anything but weak, and considering all of the fuzz coming off of the guitars, it makes sense that the rhythm section here would have to put up just as strong a fight. For the average band trying to make music in the style of Thundermother’s, focusing on a defined compositional center is key, but this is a group that seems to be comfortable spreading the love across the whole of a single, which in itself makes their sound a win for critics, fans, and anyone picky about the rock music they listen to.

I hadn’t heard about Thundermother before getting word of the massive buzz they’ve been generating with their live shows, but with the arrival of “Watch Out” I think it’s very clear that they’re on their way out of the underground at the moment. The mainstream is hungry for more guitar-driven music, both in rock and other genres like hip-hop, but the purity of what this group has to offer in their new single might be some of the best news hardcore rockers have gotten in a long time. If you love rock, the bottom line is simple – Thundermother is a band you need to be listening to.