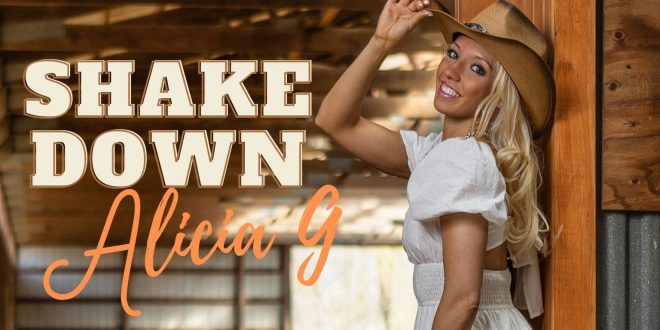 Harmonies don’t have to be the centerpiece of a country-pop single, and Alicia G wants us to know that in her new single “Shake Down,” which I would qualify as her most rhythmic thus far. There’s so much affection in the beat here, and still, it’s Alicia G’s alluring voice that stands out as the most intriguing element to pay attention to in the song. “Shake Down,” as a single and a music video, is a new high point for its creator, and perhaps the right closer for her summer output ahead of a new season on the horizon.

For how groove-oriented this performance is, there’s no getting around how little the percussion is adding to the bottom end. The dual guitar parts are organizing the better part of the arrangement on their own, with the bass a mere afterthought in the mix, which gives the rhythm over to the woman dishing out the verses well before it does the drums. She can handle the responsibility, and anyone who thinks she wouldn’t be able to is shut down inside of just a few minutes of play in this track. In its totality, “Shake Down” is a statement that says a lot about where Alicia G is going as a country artist next.

While I do think that there’s a lot more this singer can accomplish with a little more lyrical exploration, Alicia G is definitely getting into the spirit of the country aesthetic she’s been playing with all year long here, and I want to see just how much she’s going to do with it before evolving yet again. There’s nothing spectacularly inventive about the framework of “Shake Down,” but that’s not what it’s meant to advertise; this is about a singer and her love for the art she makes, and for what it’s made to do, it hits a homerun.

Previous rue vox Teams with HEIDI SHEPHERD (BUTCHER BABIES) in Brutal New Single, “Bitch Don’t Come For Me”
Next Single Review: Litvar “No One Tastes Like You”