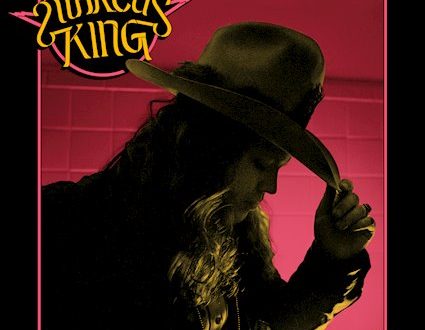 Holed up in Dan Auerbach’s studio in early 2021, 26-year-old blues rock phenom Marcus King cut his fifth studio album in just six days. Young Blood, King’s second solo effort after the success of his first project, The Marcus King Band, is the musician’s testimonial to the core of his musical foundation. A fourth generation musician who learned guitar at the age of 3 from his blues rock musician father, his roots are deeply planted in live rock and roll. Growing up in Greenville, SC, King recalls his first memory as opening his dad’s guitar case and strumming the strings of an Epiphone El Dorado. He aptly named his debut solo album and first collaboration with Auerbach, El Dorado, which earned him critical acclaim. Young Blood furthers their kinship, and aims to throttle the gas to create a larger than life, arena rock sound with an acutely personal touch that makes this King’s most earnest release to date.

A timeless concoction of swaggering rock and supersonic soul, Young Blood marks a new sonic chapter for King, drawing inspiration from rock influences including the Jimi Hendrix Experience, Robin Trower, Grand Funk Railroad, Black Sabbath, Free, and ZZ Top. He does not disguise his influences or ambitions, but wears them on his sleeve as he brazenly captures the spirit of the 70s in a time when modern music shys away from such candor. The full extent of the record was cut live in studio, another feat that reinforces King’s inherent talent, and adds a palpable warmth and force of gravity to the album. Each track adds more momentum than the next, resulting in a persistent and wholly gratifying listen.

King is highly attuned to his musical instincts and he does not hold back. The album kicks off with the high charged, boot stomping track “It’s Too Late,” which storms out of the gate with a punchy riff and swinging groove as he assures an ex, “I don’t have anything bad to say about you, but I don’t have anything good to say about you either—if you want to come back, it’s too late.” The following “Lie Lie Lie” erupts in a wailing guitar solo, and percolates between shuffling drums, soaring riffs, fierce instrumentals, and a head-nodding hook that grabs you by the throat.

“Hard Working Man,” the album’s lead single, has garnered a total of 1,848,500 streams to date and serves as the record’s most danceable tune. “Rescue Me” brings you down South while ominous guitar snakes around a jangling beat. King’s vocals shift to a lower range, treating us to a side we don’t often hear, as he opens up about a season of darkness and despair. There is rarely a slow moment on the record, but this track shows King hitting the breaks, to at least slow his pace. After a difficult breakup and period of excess and addiction, King pleads for salvation, singing “All I need, all I’m wanting/Is something sweet, to take all this pain that’s been haunting me/Hold me down, don’t let me get any higher/Turn me around, pull me away from the fire”. Celebrating tenacity and self empowerment through self redemption, King awakens by the end of the track, and carries on steadfast with his new realizations.

“Good and Gone” has an undoubtable force with King’s growling vocals and soulful groove. It is pure, gritty blues rock, amplified by the prowess of King’s talent and sticks to you for the remainder of the album. Scorching guitar riffs define the song and transition into another standout track, “Blood on the Tracks.” Co-written with the legendary Desmond Child [Aerosmith], he confronts dark thoughts over an organ-laden beat and blues heavy rhythm. Following suit, the visceral “Aim High” delivers a punch to the gut and rocks through to an epic ending that feels like electricity coursing through your body, ears to toes. Playing with classic 70s rock tropes, “Whisper” cuts with a sharp edge, only diffused with moments of enticing distortion, to the likes of Ten Years After-meets-Jimi Hendrix. It casts a near transportive state before the album concludes with the vehemently raw “Blues Worse Than I Ever Had,” fueled with a deep burning desire that doesn’t fade out even as the record draws to a close.

King doesn’t fumble with transitions or pleasantries. He fully delivers an upfront, honest rock and roll record that physically seeps with the blues and a heaping of Southern soul. Young Blood showcases a tender humanity and reflects on the musician’s troublesome times which are now in his rear view. After overcoming obstacles with relationships, mental health, and addictions, King diligently embarks on this new, invigorating chapter. The spirit of his music encapsulates the everyday man and sparks that fire within us all, amplified by his supercharged sound and emotional delivery. King certifies that there was one thing he was put on this earth to do, and he surely lives up to his surname. Young Blood is out  August 26 via Rick Rubin’s American Records/Republic.

Previous Cleveland’s MESSMAKER Releases New Single “We Are The Architects”
Next THE LA MAYBE Release Official Lyric Video for Acoustic “The Long Road”!