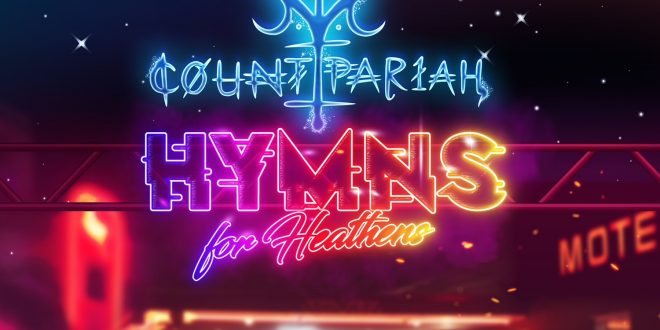 Rock fans are some of the best; once they’re hooked, they’re ride-or-die loyal. But this audience’s energy and allegiance are only part of the reason Count Pariah embarked on their rock and roll journey. Lead singer James “Shibby” Croft, guitarist Jason Breland, bassist Dustin Barousse, and drummer Adam “BiRD” Tilley are all family men from Knoxville, Tennessee. As fathers first and rockers second, they pride themselves in making music suitable for fans of all ages. Their bond goes far beyond the music itself, built entirely on experience and trust. Count Pariah had instant chemistry that made their talents inseparable. The origin of their band name is enough to lure people in on its own: “By definition, the count is of nobility. A pariah is a social outcast. We like to look at ourselves as the kings of the outcasts. That’s who we are. We don’t play by your rules. We don’t let big money and big music tell us what we can and can’t do. We do what we like because the passion is there. The passion is in the music.” You can hear it in their newest single, “Paranoia,” which is the leading track from Count Pariah’s upcoming EP, Hymns For Heathens.

Anything new can be exciting yet intimidating at the same time. As Count Pariah looks to take this big leap forward with their music under Blue Collar Records while still carrying out their daily lives, it can create a bit of paranoia for them. This inspired “Paranoia,” as the band members balance everything and step into so much that is unknown. This tension and unease can be heard in the core instrumentals, with an unrelenting rush from the guitar, dominatingly powerful beats pounding from the drums, and looming darkness and mysteriousness from the bass. However, the beauty of the song is that we have all felt intense fear and angst at certain points in our lives, making it easy to connect with it universally.

The animated style and visualized storytelling in the “Paranoia” video precisely match the essence of the song itself. Within the asylum, Count Pariah are trapped in the prison of their own minds. Their lyrics plaster the walls and windows of the institution, forthrightly conveying their spiraling emotions weighing them down. Eventually, someone hands Count Pariah the medicine to alleviate their suffering, and in the shadows behind the hand holding the pills are each of their instruments. In the end, music is the remedy that allows them to break free.

How did you come up with the name Count Pariah?

A: Simply put, it’s an oxymoron. We wanted a name that sounded cool. It’s got a certain way of sticking when you say it. It plays on the mind and makes you think.

How did growing up in Knoxville shape your sound?

A: We all didn’t grow up in Knoxville however, we all grew up in the South. There isn’t a real geographical connection to our sound. It’s more about our individual influences and musical upbringings. Count Pariah is a melting pot for musical backgrounds.

What is your most memorable performance?

A: Our most recent show at The Concourse here in Knoxville. Great energy, wonderful crowd, it was awesome. Definitely a night to remember for everyone.

What was the development process of “Paranoia” like? What is the message behind the track?

A: The development was a long process. It had a completely different intro at first. Paranoia had many stages to get what you hear today. The message is open to interpretation. The song was written from an aggressive and dark, uncertain time. Relatable to everyone who went through 2020 with us.

What was the decision behind making the video for “Paranoia” animated? What do you think animated music videos so unique?

A: We wanted to have a lyric video so our fans can sing along. With an animated video, you aren’t limited by reality. Anything you want can come to life. And that’s exactly what Paranoia did. From the setting in the asylum to the style of artwork, Paranoia’s video matches the tone of the song and we’re very proud of how it turned out.