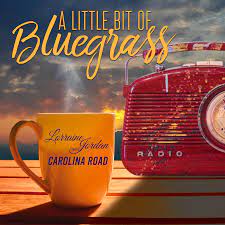 Lorraine Jordan and Carolina Road’s “A Little Bit of Bluegrass” isn’t some bold musical and lyrical statement. It does, however, exemplify the same five-star combination of talent and passion that has graced the past releases from the respective careers of everyone involved. Jordan is a longtime artistic and musical fixture in the bluegrass scene and this collaboration is largely the result of her choosing exactly which musicians she wanted from the genre’s ranks.

Bluegrass fans are lucky for several reasons. One, however, is they are fans of a style that prizes musicianship in a manner pop and other commercial forms do not. Tradition and authenticity are important as well, without a doubt, but the quartet-plus-sized musical unit demonstrates their talents during the track without stepping on each other’s toes. The arrangement is superb. Listeners will never feel overwhelmed hearing “A Little Bit of Bluegrass”.

It’s celebratory without ever straining for its effects. The song, at its heart, throws a party for bluegrass music and its ability to dispel a listener’s sadness. It’s culled from the same tradition in rock music that’s praised the glories of the style since time immemorial. No one has to reach trying to latch onto the cut. It builds a natural connection with listeners that all the best examples of the form share.

The multi-part vocal harmonies are another staple of the style. Jordan has selected a complementary range of voices for the project led by lead vocalist Allen Dyer. There’s an overall balance between these two approaches that both newcomers and longtime fans of the music will likely appreciate. It sounds natural and never rehearsed.

“A Little Bit of Bluegrass” has a buoyant sound but, ultimately, has a melancholy core. There’s no need for this song unless you are in pain to begin with and another way of hearing the lyric is that it’s more a wish than it is a deeply held belief. The best bluegrass is often deceptively simple and this song is no exception. They aren’t grappling with major themes during this song, but it’s an invigorating listening experience.

It is one that holds up under repeated listens. You can keep coming back to this song over time and find it holds onto its entertainment value. Much of this, of course, is because Lorraine Jordan and Carolina Road possess an innate musicality that keeps you listening when other facets of the song may have you wavering. Some may say that isn’t all that rare, but it is. Jordan has long ago captured the flash of magic lighting up musical art and working with Carolina Road only brightens her glow.

Let’s hope they keep burning away the darkness for years to come, in whatever capacity, but we deserve to hear more from this particular collaboration. It has the quiet confidence, despite tempo or energy, of an act that knows how good they are and will keep perspective as they continue to improve. Lorraine Jordan and Carolina Road’s “A Little Bit of Bluegrass” blossoms with varied and melodic life.