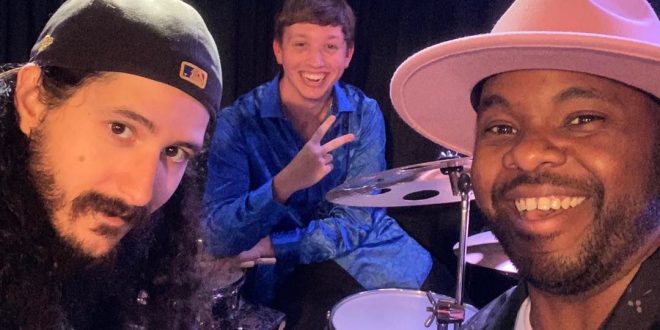 So great to chat with you – we are excited to learn more! Can you walk us through the formation of Cognate Souls.

Cognate Souls actually started many years ago. The idea was the creation of a group that represented different personalities, backgrounds and styles that somehow came together to create great music. Kevin started the process before Covid and people came and went. Things happen when they’re supposed to, so Jonathan eventually came from a Craigslist posting. When one drummer unexpectedly left, Kevin found Casen from a Facebook post to sub in for a show. He had too much fun so he couldn’t leave. So we came together as perfect strangers.

What are the band member‘s musical influences, and do they show up in many of Cognate Soul’s creations?

We’ve been chatting about doing a list of our top 10 albums and seeing how many we have of the same. We’d probably have 25-30 different albums. Kevin studied jazz when he was young. That mixes with Motown music, such as the Funk Brothers, his parents would listen to and popular R&B and soul from the ’80s and ’90s. Of course there’s gospel as well. Jonathan’s mixture includes jam bands like Lotus and Umphrey’s McGee. He’s all for a show that doesn’t end for hours. Casen leans towards Nightmares on Wax and Feel Kuti. Since he’s a percussionist as much as a drummer, he’s often influenced by textures and creative ways to build and shape his playing for unusual sounds and rhythms.

How do you hope fans are impacted after listening to your music?

We hope they see the light inside themselves, to push through and overcome whatever the circumstance. We’re ultimately a group that is about growth, love and unity. We understand life is real. It’s good at moments and a struggle at other times. We’re all connected though, so we hope people see their connection to each other and realize we help each other move beyond the bad times. But, because it’s serious doesn’t mean it has to be a funeral dirge. Nah, we’re way more fun than that.

Do you have other new music on the way – what can fans expect from you?

Most definitely! There are so many stories to tell. Next up we’ll explore that classic topic of love and the struggle it creates when you’re more invested than somebody else. That’s a universal feeling, you know? Beyond that, we’ll keep you waiting with where we plan to go with some of our forthcoming singles. We’re shooting our video for Milk soon so fans will be able to check that out on YouTube and we’re building our tour schedule. There’s a lot of work happening behind the scenes.

What were the initial days for the band like and where do you all see yourselves heading as a group?

Our first gig together, Kevin wanted to be near the venue one hour before our call time, Jonathan wanted to be there 30 minutes early while Casen wanted to get there two hours early…just in case. That’s actually pretty indicative of our personalities. Jonathan and Kevin had been playing together for a few months. The idea was always to approach our art professionally but in a laid-back environment. That works for both of our personalities. When Casen came on board, it was like, come on in and play young fella. So it didn’t take a lot of time to mesh. We start rehearsal with a jam session, so that loosens it up a little bit. I think we jammed for a straight 25 minutes that first day, just transitioning from one feel to the next. Up next, we’ll continue to hone our skills and find that balance of musicianship where music meets lyrics and they mesh perfectly. We’re pushing forward with music videos, new songs and increasing our touring schedule. We definitely want to play anywhere people will have us and we’re hoping to have bigger and bigger shows.

Where are all of the places we can find and follow you?

We have to tell people how to find our music but it can feel like we’re pushing people to go, so asking to follow us is a welcomed gift. Hopefully, you’ll check out our website and sign up for our newsletter at CognateSouls.com. A bigger email list really helps with talent bookers and increasing our tour dates. You can hear our music on Spotify, Apple and all the major places folks love. You can check out our social media on Instagram and Facebook at @CognateSoulsOfficial and we have a YouTube channel as well.