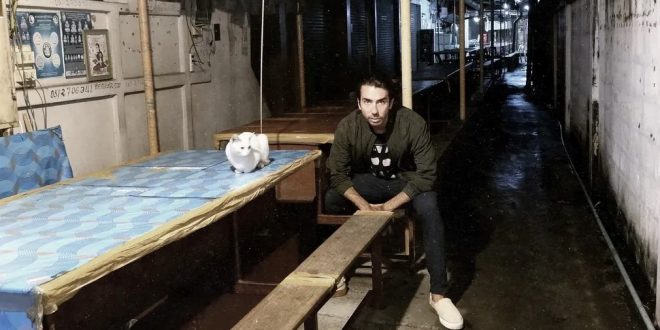 Every dreamer knows that daylight is far more disorienting than the dark. When the light gets too bright, everything becomes defamiliarized. Should you wake to a day drenched in sun, weird and wondrous, you might think you were still caught in a reverie. Electronic producer Maffmatix knows all about the psychedelic qualities of copious light. He relocated from Los Angeles to a place that’s even more fiercely illuminated than Southern California: Bangkok. The Thai capital is the setting of “Wake Up,” the clip for his hypnotic deep house single. Light falls relentlessly on the protagonist and his partner alike, but no matter how crisp and clear the street scenes are, it never quite seems like they’re fully awake.

Even without the video, “Wake Up” is the kind of track that can generate some seriously altered states. It’s an example of the type of sonic alchemy that has made Maffmatix an indispensable figure in electronic music – not merely in Bangkok (although his hometown fanbase is a passionate one), but everywhere house and trance are appreciated. Though “Wake Up” is immensely danceable, it’s also a song that encourages the listener to slip on headphones and lose herself in fantasy. The bass is deep, slippery, intoxicating, the synthesizers pulse, blur, and shift, the beats are propulsive, the melody is irresistible, and the vocal sample is intoxicating in its otherworldliness.

That voice belongs to singer-songwriter Atiya, whose distinctive combination of Southeast Asian meter, North American jazz, international synthpop, and electronic experimentation is on glittering display here. “Wake Up” was originally a straightforward pop song that Atiya posted to the Internet; Maffmatix took the track, exposed it to light and shadow, twisted it and shaped it, and transformed it into the mesmerizing single we’re sharing today. He discovered a gateway to a strange alternate dimension hidden between Atiya’s verses, shimmied it open, and let the haunted spirits pour through.

The two central figures in the “Wake Up” clip are chased by ghosts: shades from the unconscious, specters from the past and present, and the chill of insecurities that rattle even the best relationships. The main character of the video is a young man pursuing the embodiment of his desires: a woman who floats on the Bangkok clouds, and traces of whom are visible all over the city. But whenever it looks like they’re about to establish a real-world connection, he wakes up, wide-eyed and alarmed, back in his bed. Is this an expression of frustration, or is it wish fulfillment? Does he want the chase without the consequences? And what about the woman – doesn’t she have desires, too? By the end of the video, you’ll know for sure.

What is one of the most fascinating experiences you’ve had in your music career? Did you learn anything about yourself as a result?

One of the most fascinating experiences I’ve had in my music career: Back when I was in my early 20’s, my friends and I were all collaborating on indie music and film ideas, as a lot of us worked in those fields (or aspired to).  A hip-hop track we made sounded so good that we also made a music video for it.  We put it on Youtube (in Youtube’s early days) and someone in Hollywood liked it so much they emailed us and the song itself ended up landing on the soundtrack of a television series for multiple episodes.  Because we were young and naive, I don’t even remember who got paid or how, that process was totally disjointed and unorganized.  That was one of many experiences I would have down the road that taught me the importance of having good business skills and being aware of every step in that type of situation.  It was cool none the less!

Can you walk us through generating the concept for “Wake Up’s” music video? It is unique and complex, so was the story-boarding process long and complex as well?

My friend Jason (the lead actor in the video) had an idea for a music video in his head where a man keeps dying and waking up, which we liked a lot, so we took it and adapted it to be closer to the meaning of the song.  The music video is open for interpretation, but the concept was about looking for something you already have.  Sometimes we already have the thing we’re desperately searching for, right under our nose.  Our lead character spends day after day marching forward through his life, chasing a dream woman.  Every time he’s almost within reach, he wakes up and repeats his search.  By the end, he finally has her within inches of his face on a dance floor, they are almost spiritually locked, only for him to wake up again.  But this time, as he gets up to make his usual moves, we stay in his bed to see she’s in his bed as well, and there’s even an old photo of the two together.  My vision was that he’s always had her, this seemingly elusive dream girl.  She’s always been his, but he’s been asleep to the reality and he’s been desperately looking for something that’s always been right under her nose, and that is actually quite sad for both of them.  You see it in here eyes in the end.  But some who watch it think that she’s a ghost.  Others think that he finally got her.  As I said, I’m cool with the viewer making up their own mind.  😉

How do you believe your experience working with rappers, metal heads, bohemian buskers, underground bands, as well as your own indie-electronic band Rock Shreller has molded your sound and musical style?

My experience with immersing myself with such a wide variety of musical entities just furthered my belief that ‘genres’ are too simplified.  The boxing of sounds into a category somehow gives me the heebie-jeebies.  I love the idea of making any style of music you want, any time, and mixing them however you see fit.  It may not fit everyone’s taste, but I will continue to make whatever music that tickles my fancy in that moment.  That doesn’t mean I am going to release an album that crosses every genre known to man in a jumbled mess… but I might.

Are there any interesting things you’ve noticed about the electronic music community that are different from other communities within music?

The main thing I love about electronic music is how dance-centric it is.  Of course people go to rock shows and hip-hop shows and everything in between and have a good dance.  But nothing turns a crowd into a pulsating, gyrating, zombified dance-mob like electronic music, in my opinion.

You helped direct the music for “Wake Up” in addition to turning it into a deep house track, so can you talk more about what the filming and production process was like?

Filming “Wake Up” was so fun because from start to finish I had help from my closest friends.  My fiancé and two sons (not really my sons but we call them our sons) were with me from day one, writing, planning, structuring, hiking around town, acting, all of it.  We also did it during Covid time which was nice because there wasn’t a lot of work in that time so we stayed busy!  Basically everyone in the cast and crew were friends in Bangkok, and it really was a passion project.

You mention that your new, first solo album Metanoia Seven was produced during a time of great personal transformation and connections with other artists. Can you elaborate on that transformative process? How have you been affected as an artist?

After I left Rock Shreller, I realized it was the first time in a decade that I was able to do solo musical creation and really focus on my own vision.  Covid hit the world and obviously with that came a great shift in so many ways that affected the planet.  That sent both good and bad shockwaves across this sphere called Earth, sometimes depending on who you were and how you handled it, and I intended on making it work for me as much as possible.  In the past couple years I have spent more time bettering myself than I had in all the years prior, and when I started making Metanoia Seven, I was able to put some of those feelings onto wax with a clear mind.  This album still has silly moments and simple concepts, but a lot of it comes from a deeper place as well.  It was cathartic to release this album and it’s only the beginning as I continue this wild and beautiful journey of life.