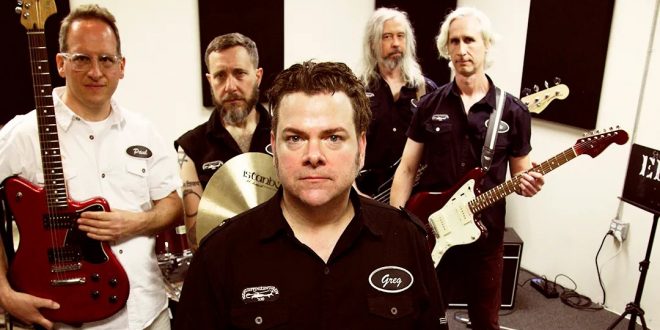 Greg Hoy & The Boys are back again, right after wrapping their Build Back Bitter tour, with another irresistible indie rock single, “Carry Me Back Home.” Previously, the band shared “Jet Black, Get Back” fresh out of the recording studio, which hyped fans up for their return of live show performances. Before that, they made an emotive, eternally-satisfying cover of “Sure Got Cold After The Rain Fell,” putting a modern touch onto this ZZ Top classic. These two recent singles reflect different qualities and potential styles for The Boys, and each do so in a way that showcases their versatility as artists exceptionally. Of course, this should come as no surprise with a leader like Greg Hoy, who has had his hands in virtually every component and layer of the music industry throughout his years of experience. “Carry Me Back Home” continues their trending pattern of success with each track and exists as the second single to be released as part of The Special Party album.

Just as Greg Hoy & The Boys sing in this song, their lyrics “ring like bells inside your ear.” Ultimately, the song is an ode to true friendship targeted at those real friends who have your back through anything and everything. In Greg Hoy’s anecdotal delivery, they are with him following a night out indulging in one too many drinks at the bar. That special person sees it through to keep you from falling down to the ground and get you home safely. The instrumentals from The Boys are steadily propelling, especially with the incredible guitar solo in the middle, generally keeping the song’s energy high while conveying this meaningful, easily understandable theme to listeners.

In between the clips of them playing “Carry Me Back Home” in the studio, the video spotlights other memorable moments that kindled the internal friendships within Greg Hoy & The Boys. Whether they are sitting together having cigars, roaming the streets in all the destinations they travel, or playing shows to an in-person or televised audience, it is obvious the band has a bond far beyond their musical endeavors. What’s more, the idea of being carried back home fits perfectly with Greg Hoy & The Boys making a return to the industrial mecca of Pittsburgh, Pennsylvania, the place they grew up. With more live performances cropping up in the area soon, this single plays perfect homage to where they got their start.

Q: Bring us back to the beginning of Greg Hoy & The Boys. What was the formation of the band like and how was the experience deciding that you would all pursue music together?

A: In a way, any band for which I’ve been the leader has basically been Greg Hoy & The Boys. The core musicians that perform and record with me I’ve known for 20 or so years. Some recordings or shows, new folks come into the fold. Live, it’s always flexible. I loved that Chuck Berry would just tour with his guitar, and have a band ready in every town. And while I’m no Chuck Berry, I have amazing musicians in San Francisco, New York City, Pittsburgh, Minneapolis, Denver, etc, that, if they are available and sober, can jump on a stage with me with enough notice.
Q: What was the process of filming and producing the music video for “Carry Me Back Home” like? When and how did you all decide that this was the best approach to the visuals for the track?
A: I had a health scare in January which held both the future of using my hands and my hearing in question. So I decided to book a California tour as a 5 piece where I’d just be the front man and not play guitar. Kind of like The Strokes, or The Rolling Stones, maybe. Booking a tour takes months of work. By the time May rolled around, the band was in top form, and since I wasn’t playing guitar, I had a lot more time to do things like set up video cameras during rehearsals and shows.
Diana Zuros – a great film director based in LA – was available for a few days during our rehearsal times to shoot the longer footage of the band basically performing and goofing around. Once we were back from the tour, I spent a few months dabbling with edits for ‘Carry Me Back Home’ until the video felt done. The downside to having so much footage is, as the Buddha might say, ‘The Dilemma of Choice’. That’s part of why those great 70’s and 80’s live music videos are so special. They didn’t have unlimited digital takes from which to choose for a final edit. So what you get is more like a fly-on-the-wall perspective. That’s what we were going for with the video especially since the song is about deep, lasting friendships.
Q: Can you walk people through the writing process? How does the group formulate such meaningful lyrics? What is the concept behind “Carry Me Back Home”? Was there a particular moment or conversation that sparked the idea?
A: Lyrics tend to come in a flurry of madness. I had the idea of the chords and took it to the recording sessions for the album. It felt like a Strokes rip-off to me. Having been in the same rehearsal space as them ‘back in the 2000s’ in midtown Manhattan, it seemed ok to mimic their style especially since we’d hear them drunkenly practicing ‘Last Night’ 100s of times.
When it came time to finish the lyric, I was listening to the instrumental for the week I was staying at the Ace Hotel in NYC. I watched this guy Felix jump out of a balloon way up in the sky for Red Bull sports or whatever. Suddenly the line ‘We’re falling down… we’re falling down’ hit me over my hungover head. That chorus became the nucleus of the tune. And the rest was just about gratitude and love in all their forms.
Q: Why is it important to incorporate a variety of different genres into your music? Can you touch on the importance of creating diverse music in this industry?
A: I wish I had some great answer for this. The truth is I love and listen to all types of music so it tends to creep into my songwriting. I also get bored really, really fast. But it’s just rock n roll – drums, bass, and guitars. It never deviates too far from that core for me!

Q: Would you like to mention any upcoming events and/or projects that fans have to look forward to from Greg Hoy and The Boys?

A: We’re finally doing another east coast tour in the fall (I haven’t played NYC since 2019). There’s a few new EPs in various stages of completeness. I started working on a musical just before that pandemic thing that a few trusted friends say I should finish. I’m also really into fitness right now so if anyone out there is looking for motivation, HMU!
Thanks for the interview!
Follow Greg Hoy & The Boys:
Official Website | Facebook | Instagram | Twitter