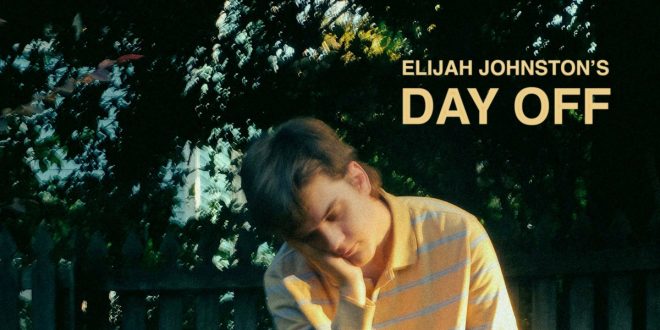 From cerebral rock harmonies ala “Swimming Pool” to more casual sonic decadence in “Hornet’s Nest,” there’s a lot of musical wonderment to behold in the new album Day Off from Elijah Johnston, but I wouldn’t quite go so far as to say that this is a record centered exclusively on the depth of its melodicism. On the contrary, whether it’s the subtext of the lyrics in “Greatest Hits” or a more deliberately muted rhythm to “Horse Girl (ft. Zac Crook),” there’s something to uncover within every expressive corner of Day Off, giving us more than a few avenues through which we can get to know Johnston as a singer, poet, and songwriter.

He isn’t shy with his lyrical emissions, but there’s just enough of an enigmatic bend to the bulk of this material to suggest that surrealism is always in the foreground guiding us towards the greater artistic narrative of the LP. Where a lot of other players in this genre would have been reticent to go out on a limb with pieces like “Molly Haskell” and “Hideout / 100k,” there’s a sense of adventure behind the drive in these songs that encourages us to believe in this player’s truths and, moreover, the emotions he’s putting on the line here.

Gentle melodies are everywhere we look and listen in this record, but to say that there isn’t any oomph to works like “What We’re Made Of,” “Bet the House,” and the aforementioned “Swimming Pool” would be refusing to acknowledge how multidimensional a collection of tracks this really is. Although it’s hardly a progressive concept work, there’s connectivity here that creates a fluidity between songs, and it makes it all the easier for us to sit down and hear the album as a complete release as opposed to cherry-picking the tracklist. Johnston uses tempo to make his point in “On a Good Day” the same way he exploits a sublime tonality in the likes of “Bet the House,” “Molly Haskell” and “Horse Girl,” all three of which could work quite well as singles. The pacing of this album is ace, but it’s made all the greater through the precision of this player.

While he’s not quite being the overambitious singer/songwriter a lot of his peers are trying to be, Elijah Johnston doesn’t hold back from showing us the many different roads he can take as an artist in Day Off, and I can understand why underground music fans are getting excited about his work. He’s showing off his persona without a filter in all nine of the sons in this tracklist, and though he has a lot he can build off of at this point in the game, there’s no getting around the solid foundation he’s establishing in songs like “Hornet’s Nest,” “On a Good Day,” and “Greatest Hits.” As an alternative to the oft-sugary content that makes its way onto the FM dial disguised as pensive singer/songwriter material, Day Off is a real gem – and perhaps the best way of getting addicted to this player’s brooding compositional dynamic.