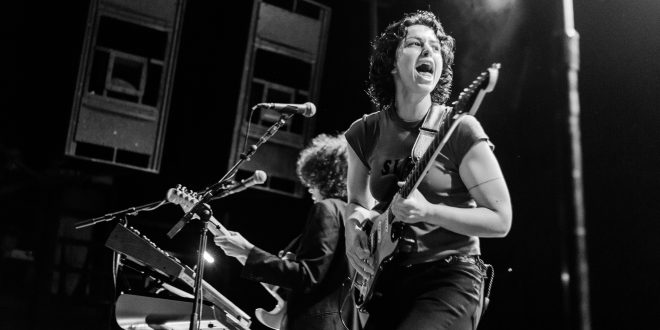 MUNA brought their “joyful queer revolution” to a sold out show at the iconic First Avenue in Minneapolis. For the whole set, the crowd had an intensely positive and free-spirited energy which didn’t go unnoticed by the band (Katie Gavin, Naomi McPherson, and Josette Maskin). They thanked everyone in the crowd for their kindness and compassion toward one another in these uncertain times. It’s impossible to attend a MUNA show and not feel the love radiating from crowd to stage and back.

MUNA released their third album this past June, a self-titled album encapsulating the band’s growth, queerness, and confidence in all it means to be human. They played nearly every song from the new album at the show, and peppered in some old and beloved songs from their past two albums as well, including self-love pop jam “Number One Fan,” and queer safe haven song “I Know a Place.” No matter what song they played, new or old, the crowd sang it right back at them at the top of their lungs, and never missed a beat when it came to dancing.

During a small talking break, lead singer Katie openly talked about her anxiety, and how sometimes she can feel “overwhelmed by the goodness.” They talked of how the new MUNA album has so much space for joy, and how the sad songs on the album are approached in a different, more tender way. This sequed into the ultimate MUNA sad song “If You Love Me Now,” from their first album About U, followed by “Kind of Girl” from MUNA, dedicated to “any queer person here learning to talk about their identity in a new way.” It’s clear that over time, the band has grown more comfortable in their own skin, and it was beautiful to see to many queer people at the concert feel the same way. During this “country” part of the set, someone from the audience threw a pink cowboy hat onstage which caused an uproar of cheers. Jo rocked it for a while, then passed it on to bass blayer Tino. MUNA ended the set with a bang: they played gay anthem “Silk Chiffon,” and brought out opener Jensen McRae to sing Phoebe Bridger’s verse. If they weren’t already, everybody was jumping, dancing, and screaming the lyrics at the top of their lungs.

MUNA created an ultra queer dance party and safe haven at their Minneapolis show, and will undoubtedly continue to do so in each city they stop at for their epic tour (which even hops across the pond in November!).