Home / Article / The Strong Relationship Between eSports and Music 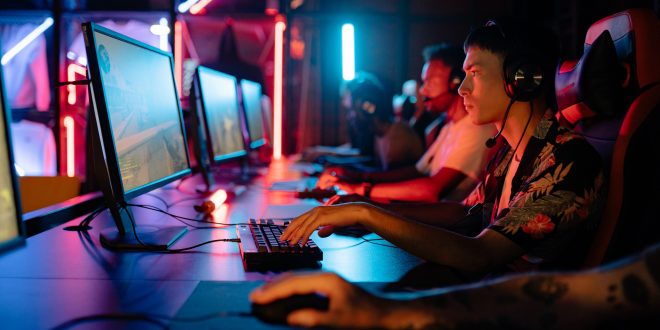 In 2022, two of the most popular sources of entertainment are:

They are especially popular with younger generations, such as millennials. Interestingly, there is quite a strong relationship between these two different things. If you’re a fan of either of them, you might be interested to learn more about this.

Here’s a closer look so you can understand the strong relationship between eSports and music:

Music will be played over the speaker systems between the matches at almost all major eSports events. Sometimes, if it’s a big event, there will even be a guest star (or stars).

Everybody remembers when DJ Khaled performed on the Overwatch League stage back in 2018. The reason this performance is so famous is that the eSports crowd (who typically don’t like rap music) were silent almost the entire way through. Plus, the booing on top of this didn’t help! Since then, though, eSports bookers have gone on to make smarter decisions regarding which musical artists they book to perform, like Marshmello.

Furthermore, it has recently become more popular for people to place bets on the different matches taking place at eSports events. It’s during the music breaks in between the rounds when fans will typically place their bets. You can discover crypto eSports Valorant betting platform – Thunderpick if this is something you would be interested in trying, too.

eSports players are professional gamers; they compete in eSports tournaments for a living. Naturally, this means they need to be as comfortable and relaxed as possible in order to win matches.

Each eSports player is different when it comes to what makes them relax and perform well, whether they’re playing Call of Duty or FIFA.

For many players, music is the answer. This is why you will often see them listening to music through earphones or headphones mid-game so that they can immerse themselves more and avoid being distracted by the loud crowds.

If you’re a gamer yourself, it’s recommended that you try listening to music while playing competitively. You might discover that it works perfectly for you, helping you relax and concentrate on the game more. If this is the case, stick with it and use it as a tool to win more games.

Streamers Are Reliant on Music to Keep Their Content Entertaining

Most professional eSports players are also content streamers when they’re not playing in tournaments. For example, they will live stream content on Twitch and YouTube in order to make money.

While live streaming, these streamers will often play music in the background to keep viewers entertained and listening. Without music, live streams automatically become boring and less immersive. Take Ninja, for example, who is always playing music for his fans when he streams Fortnite on Twitch – it makes his content far more exciting!

Hopefully, you now know more about the relationship between eSports and music, which might have also inspired you to create a playlist for your own gaming adventures!

Lastly, as the eSports industry evolves, you can expect to see a lot more live events that feature music as their focal points.

Stephen Vicino is the founder of MusicExistence.com. He created this site to give talented musicians a voice and a way to be discovered.
@@svicino
Previous Interview: Valley on their U.S. Success, Writing a New Album & Making Pizza with Dave Grohl
Next Single Review: “Sweet N Sour” Jojo Engelbert and Yetibear