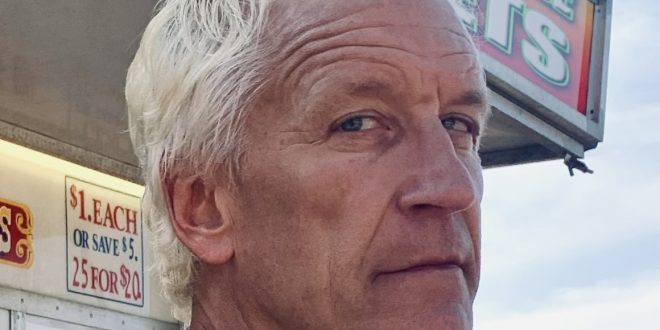 Slim Sly Slender is the visual artist turned musician who’s frisky, vibrantly eclectic pop-rock results in catchy earworms and playfulness with sound and melody. He’s influenced by an array of genres and artists, from Hip Hop to brit pop, from The Beatles to Beck. When it comes to writing songs, he’s guided more by story than genre, giving his music a unique sound.

He just released his latest single “Black Charger,” from his upcoming album ‘Pay to Play.’ It’s a pop rock meets 90’s hip hop meets folk song that’s reminiscent of Beastie Boys and Steely Dan. It was inspired by Slim’s time sitting in traffic going into and out of Washington D.C. on the beltway.

“Having lived in the Baltimore/Washington area for many years this is something that I have learned to avoid if possible,” says Slim. “It’s pretty crowded at the best of times and kind of a madhouse of the driving world at others. I try to stay relaxed and on point in this driving environment and started to notice that when traffic got chaotic there was often an aggressive driver in a Black Dodge Charger involved.”

“Black Charger” is fun, exciting, and different. You can sense Slim Sly Slender’s joy and fun with music, using it as an extension of himself and a tool for expression. What makes “Black Charger” so great is the fast paced nature of it, kind of like the black charger itself.

Stephen Vicino is the founder of MusicExistence.com. He created this site to give talented musicians a voice and a way to be discovered.
@@svicino
Previous 3 YEARS AS A GANG MEMBER – THE TRUE UNTOLD STORY!
Next Popular Jamband New Potato Caboose Release Their New Album ‘It Ain’t a Thing’