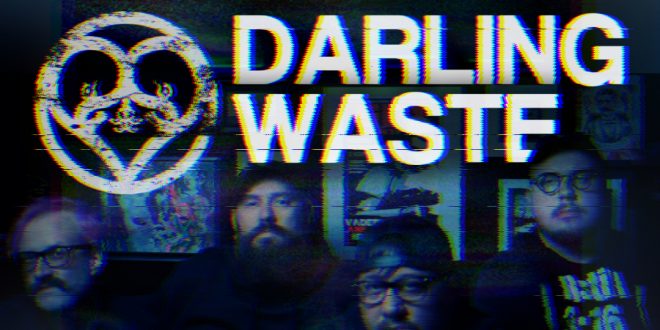 DI Records have announced the signing of Cleveland emo band Darling Waste. “We at DI Records are proud to announce that the alt rock band known as Darling Waste has joined our ranks,” they said in a statement on their Facebook Page. “Lance, frontman, has worked with several members of DI already. We know him to be a hard-working and caring individual. It’ll be a pleasure working with him.”

From Cleveland to Brooklyn to Brighton, England, and back again, Darling Waste has spent almost 20 years independently recording, releasing, and touring emotionally honest songs that blur the line between alternative indie-folk and third-wave emo, all while making life-long connections with fans the world over.

Singer-songwriter Lance Waste started the band as a solo project in 2003, performing DIY shows around his native Cleveland, Ohio. His single “Changing Of The Seasons” was picked up by local radio and soon caught fire, being added to rotation on over 100 stations. Waste soon moved to Brooklyn, New York, and recruited friends to fill out the band and hit the road, performing on a self-booked national tour in support of their first album, selling 11,000 copies along the way.

Fast forward to 2022, and Darling Waste has played over 900 full band shows and 300 solo shows in 11 countries. They quickly became one of the prominent underground acts of the mid-2000s indie emo scene, racking up over 1 million plays on Myspace.com while performing with acts like Blink-182, Fallout Boy, Panic ! At The Disco, Dashboard Confessional, Hawthorne Heights, The Ataris, Yellowcard, and Bayside. They’ve performed festival dates including Warped Tour, Hard Drive Fest in London, Warrington Music Fest in Warrington, England, and Brighton Music Fest in Brighton, England.

Darling Waste’s music has been featured on hundreds of Spotify playlists and has been featured on MTV, VH1, HBO, Showtime, and feature films. The band released a Hot Topic exclusive EP in 2010, following it up with an East Coast in-store performance tour before heading back across the pond for their first UK and EU headlining tours. Darling Waste moved to Brighton, England in 2009. Their UK album saw Darling Waste nominated for the Brighton Music Awards, where they presented alongside Jimmy Page (Led Zepplin) and Roger Daltry (The Who).

Darling Waste has spent two decades carving out a DIY niche for themselves as an emotional alt-rock band with a punk rock ethos and an indie folk soul. The band independently released five full-length albums and four EPs before going on an almost five-year hiatus in 2017. Now Darling Waste has reformed, released a new single, and has an EP due out this Fall. They are performing select festivals and headlining sets for the rest of 2022.