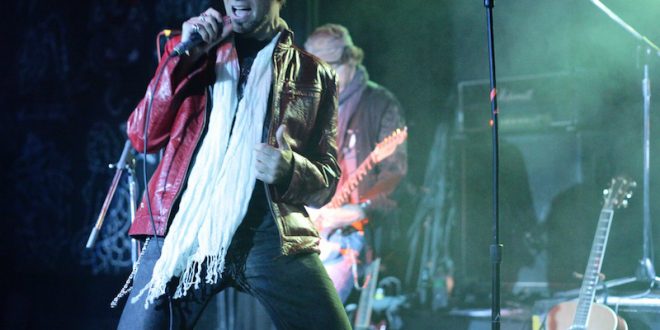 New York City is the epicenter of glitz, glamour, and grandeur. But hidden deep in the underground, there is a moody disruption. Restless creatives are looking to break through surface-level materialism and opulence to show the grittiness of the city. Fueled by melody and rage, Love Crushed Velvet is on the rising scene of modern contemporary music, shaking up the industry. The alternative rock band was formed in 2008 by lead singer and songwriter A.L.X.  Their songs climbed to the top of electronic music blogs across the internet, garnering attention that eventually landed them as a featured artist in the game Rockband 3. Their fusion of classic rock, post punk, and modern alternative gives Love Crushed Velvet their unique edge as they explore the dark underbelly of the city and the many lessons to learn from it.

Love Crushed Velvet’s latest single, “Future,” takes listeners on a joyride of pure reckless fun. With a solid backbeat, the band cruises through bold hooks and electric choruses that instill a feeling of carefree abandonment. The cascading guitars, pumping drums, and raspy vocals offer a look into Love Crushed Velvets’ exceptional talent in creating substance-based tracks. The visual is hypnotic and synched to the beat of the song, which follows a robot marching through a futuristic setting, signifying rebellion. The song is all about going against the grain and how the future is what you make it to be.

The graphics incorporated in “The Future’s” music video are hypnotizing. Why was the use of virtual reality the best way to tell the story of this track? The VR experience, when effectively paired with music, is incredibly compelling because it is multidimensional in nature–you’re a listener and a viewer at the same time.  Furthermore, the futuristic nature of the medium lends itself perfectly to a song called “The Future”.

How did the connection with digital artist Elis Ekdahl come about?  We became interested in creating videos in VR as far back as 2018, but it was very difficult to find creators who were able to do this at the time.  We had gotten introduced to Elis virtually and found his work to be really interesting.  Figuring out how to execute our vision was challenging relative to the available technology at the time, but Elis did an amazing job with the tools that he had available.

Can you talk about where the fusion of alternative, glam, and classic rock in your music derives from?   Part of it is a consequence of having grown up at a time when a lot of those influences intersected. I could listen to the Stones, the Stooges, the Cramps and Bowie’s Ziggy Stardust album in the same day and it all felt fluid and logical.  That’s why I feel that there is a lot of stylistic breadth within Love Crushed Velvet’s music–and there will be continue to be.  We want to have a sonic center of gravity that allows us to work within broad boundaries.

What are the band member’s musical influences, and do they show up in many of Love Crushed Velvet’s creations?  The membership of the band has evolved over the years, and the music reflects that.  The initial incarnation of the band had members who had played with Blondie, Billy Idol and Joan Jett, among others, and that really influenced what our debut album sounded like.  The current album had players with a very different musical backgrounds, and the sound reflects that.  LCV sometimes feels like a collective with rotating members more than a “band” in the conventional sense, and that helps to keep the creative process fresh and exciting.

What is the sentiment behind “The Future”?   There is an escapism and search for innocence and simplicity within the song that I think taps into an inner yearning that many of us have for those things.  Perhaps there is a bit of naivete within that sentiment, but we are all dreamers at heart.

How do you hope fans are impacted after listening to this track?  If a listener can feel inspired and energized by a piece of music, that’s a great accomplishment and something to aspire for as a creator.

“Baby lets go to the future, where there’s beauty and light and forgiveness surrounding me” is a moving lyric. How is “The Future” relevant to the human experience and the current world we live in?  The constant bombardment of stimulus that we experience on a perpetual basis has, in my opinion, had a desensitizing effect that separates us from our emotions and aspirations, which are often simple and sentient.  It’s led to a detachment from our core essence and has driven a lot of flawed decisionmaking both publicly and privately.  “The Future” is a call to try to get back to a simpler and purer place.

What are the members favorite scenes/ images from the music video, and why?  We all think of the video within its totality, rather than in the context of individual scenes.  What makes it unique relative to when it was made (2019) is that it was designed to follow the course of the music rather than vice versa.  That was intended to have the whole exceed the some of its parts, and I like to think that we were successful in accomplishing that.

Can you walk us through the formation of Love Crushed Velvet? I had recorded a solo album as A.L.X. in 2007 that utilized a different backing band for live shows than the one that was used in the studio.  As we started playing together, the music took on a different shape than the recorded version of that album.  Not better or worse, just different.  I really enjoyed playing with those guys and ended up writing new songs around their playing style.  It wasn’t long until it became clear that this wasn’t going to be an A.L.X. record, but rather that it had become its own thing.  Hence the new name.

What were the initial days for the band like and where do you all see yourselves heading as a group?  The early days were fun because we were all younger and more freewheeling.  That first rendition of the band was all rock and rollers at heart, and we wore that on our sleeves.  The live shows reflected that.  As the composition of the band changed, we are still a rock band, but are also enjoying infusing other influences into our music while still staying true to our core.