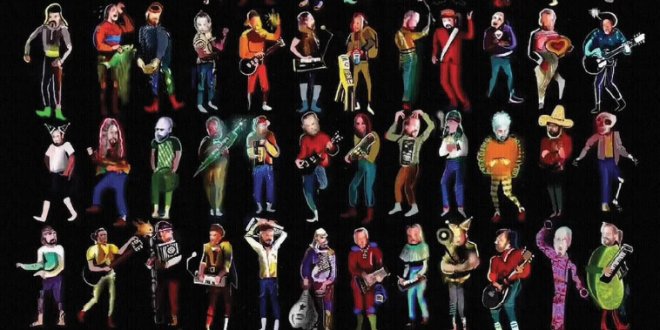 Finnish raconteur Ville Kiviniemi’s muse is restless, to say the least. His muse has found a home in London during the 1990’s performing as The Urban Peasant. Kiviniemi moved on from there to find audiences in New York City’s lower East Side “anti-folk” scene and self-released two collections entitled Toilet and Coffee. His evolution continued through ten years of honky-tonk, and later radical de-constructions of pop classics from artists as diverse as The Pointer Sisters and ABBA, but it’s as The Mattoid that he’s experienced his greatest success yet. This is his voice, 200 proof, no chaser.

Despite his obvious musical talents, The Mattoid doesn’t even consider himself a musician. The Mattoid’s character and work identifies much more with the comedy world, and he’s toured with comedians such as Doug Stanhope. His musical credits, however, are considerable for a supposed “non-musician”. He opened for the late Dave Berman’s Silver Jews on a brief run of shows, among them the Silver Jews’ all-important homecoming gig in Chicago. He’s likewise opened for legendary indie/alternative songwriter Daniel Johnson. It’s a measure of the idiosyncratic and often challenging nature of his material that he’s attached his name to such demanding performers.

The Mattoid’s third album Great Lovers begins with the track “1,2,3,4,5,7,11!” and the lyrics for the track are nothing but Kiviniemi repeating the title with various inflections. It’s a straightforward track musically, there’s nothing particularly cutting edge about it, and its acoustic foundations prevent it from ever overwhelming listeners. Brian Kotzur’s drums are a key to the song’s success. The Mattoid introduces Robbie Crowell’s saxophone near the end of “Hey Buddy, Can You Spare a Peso?” and its inclusions adds a judicious amount of flair to an already scintillating track. The steady percolating sizzle of the rhythm guitar keeps the song’s temperature high.

Experienced listeners may hear some warring influences in “Underneath the Gnome”. There’s a dollop of rock energy bubbling up to the song’s surface without overflowing as well as a smattering of their former tourmates the Silver Jews creeping through. The vocal echoes the same emotive and lightly bemused theatricality that many hear in the latter’s singing. The album’s title song has a persistent acoustic guitar strum with intermittent embellishments laid over top. It’s grief in freefall, caught between the retrospection and the immediacy of loss, and near-phantasmagorical touches like the piano are the musical equivalent of brief electrical jolts. It’s unquestionably one of the album’s highlights.

“The Windmills of Your Mind” has a lot of theatricality, without a doubt, but the lyric is packed with dazzling poetry. Ville Kiviniemi’s delivery has a lot of variation, sometimes he plays the line straight, other times he gives a sort of smirking flourish that doesn’t seem satiric, but rather irreverent. He achieves a gentle lull with “Joysfully” that may surprise some listeners and its delicacy extends to the soft press of its vocal harmonies with drummer/backing singer Brad “Sunflower” Anderson and light rhythms of its percussion.

“Lauantai Humuua (Saturday Fever)” may be an unexpected turn for some listeners as it dives head-first into outright rock. Drummer Ben Martin pounds out a relentless pulse and guest lead singer Lauren Sewell Brown unleashes an authoritative performance. The Mattoid’s third album Great Lovers is full of moments such as this and rates among the most idiosyncratic efforts you’ll hear in recent years.