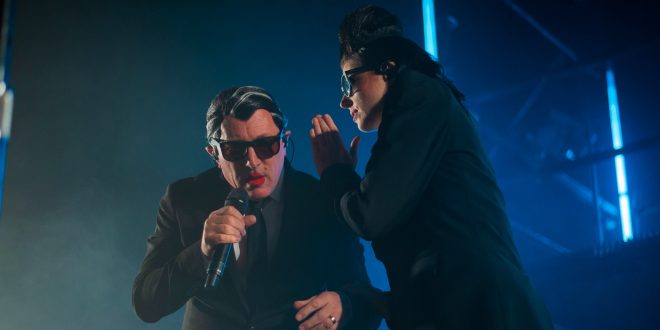 Puscifer, who are in the midst of one of the year’s most memorable tours, trekking across the U.S. with a troupe that includes aliens, Men In Black, and characters from the Pusciverse, have released a two-song remix single, “Bullet Train To Iowa”/”The Underwhelming”

A limited-edition 7-inch is available now via Puscifer.com, U.S. retailers, and at the band’s remaining live outings (dates below)

“It’s always a pleasure hearing other artists’ voices over what we’ve created. I love these remixes,” says Mat Mitchell, Puscifer songwriter and producer.

The tour has been hailed for its “multifaceted performance… that extends far beyond music” (Consequence), with New Noise Magazine saying Puscifer “have no equal when it comes to insane creativity and extreme technical musical abilities… this is the true essence of art,” and the Minneapolis Star Tribune dubbing the outing as “Devo-gone-sci-fi.”

Remaining tickets can be purchased via Puscifer.com. Moodie Black opens on all dates.

Previous Single Review: “The Narrative” B. West
Next Gallery: Failure at The Sinclair in Cambridge, MA (06.25.22)