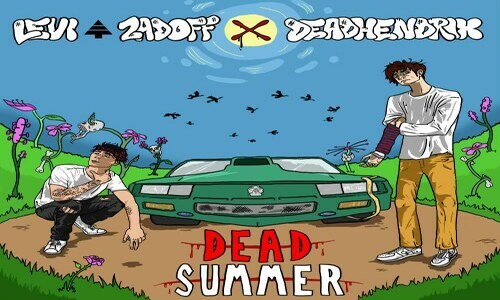 Los Angeles-based pop-punk musician Levi Zadoff and Ottawa punk newcomer Dead Hendrix have released their latest project, titled “Dead Summer.” Released via The Walking Dead this month, it depicts the cruel reality of the COVID-19 pandemic that leads to the death of many, including family and friends. It’s as if “Dead Summer” has been given a new lease on life by using the pandemic as inspiration to craft hypnotic songs that transport listeners back to a time when life was simpler. The project uses sound and lyrics to convey the narrative in a unique and creative way. Speaking about their latest project, the duo said, “To say that summer was “dead,” we mean it in two ways: 1. Literally referring to death; 2. referring to the fact that everything was shut down and “dead.” We both thought this would make for an interesting metaphor and a stimulating subject for musical composition.” The duo partnered with industry top-notch, such as IOF (Future, Paris Shadows), Yago Beats, SPLASHGVNG (Lil Peep, Sewerperson), and Imani Beats in making “Dead Summer.”

The EP opens with a sarcastic track, “Don’t Think It Could Get Much Better,” which is sure to grab the attention of fans and critics alike. The next track, “Alone,” depicts the sorrowful story of loneliness and confusion from two opposing points of view. While “Can’t Be God,” the third track in the row, shows both artists’ acceptance of the fact that they cannot control everything in their lives. “Love Game” depicts the vulnerability and anguish of being suffocated by our own emotions. The duo concludes their EP with “Teenage Dirtbag,” a bonus song. “Dead Summer” is the most authentic yet experimental piece of work by this talented duo. It has everything that Levi Zadoff and Dead Hendrix’s fans can easily relate to, from melody to relevance.

Levi Zadoff is a multifaceted lyricist who leverages his life experiences and lyrical dexterity to create music that is poised to rise in the mainstream music industry. He fervently believes in artistic freedom and music’s role as a powerful medium for expression. With the help of his alter-ego, Boy Misery, Levi Zadoff plans to develop a new music style that blends punk and rock with pop and hip-hop elements.

Gavin Kratt, better known by his stage name Dead Hendrix, is a Canadian punk/rap musician who has been writing songs since he was young. In his songs, he addresses real-life topics such as substance abuse, heartbreak, insecurities, and trauma, but he manages to do so in a way that is as fresh and distinctive as humanly possible.

“Dead Summer” is now available on all streaming platforms, including Spotify. To know more about the duo, hit follow on Instagram.