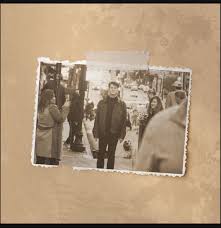 You’ve got to have more than a pretty voice to make it in the modern singer/songwriter game, and those who listen to the new album Fly Away from country crooner Chris St. John this summer are going to agree when I say that this indie player is pretty close to the full package. Not only does St. John have the voice to bring the title track in Fly Away to life, but he’s versatile enough to breathe vitality into more complex numbers like “Walk Between the White Lines” and “I Still Love You” as well. This is a well-rounded artist, and to me, a great presentation of his personality in the form of a gripping LP.

The lyrics in “I Need a Horse” and “Look For Me” are admittedly a little underwhelming next to the instrumental concepts behind both songs, but they’re not meant to give us the full story. For St. John, employing textural expressiveness was of key importance when developing Fly Away, and while this is just my speculation as a critic, I also think that the physical stylization of these tracks is a dead giveaway of his intentions. It’s meant to be imposing, and it undisputedly makes the narratives here all the more effective.

St. John uses every bit of space in the master mix to bring us a full-bodied sound from the instrumentation, and I think “Me and You,” “Missing You,” and “My Sunrise” are all able to drop as singles because of how much punch they’re packing. It’s not about being the biggest and loudest in a country/folk release, but instead about filling the void that’s often left by even the most indulgent of listens, from hip-hop to rock and generic pop music, and there’s nothing here indicating this singer/songwriter wasn’t thinking about that when he was in the studio.

There’s a willingness to experiment with the rules in “Look For Me,” “I Just Knew,” and “Nothing Left to Say” on Chris St. John’s part that I would like him to push a little more in his next release, but I also don’t know that he should be too excessive with changes to the sound he’s presently working with. Fly Away, from what I gather out of its fourteen tracks, is about as real as this player can be without stepping onto a stage before a crowd, and it would be nice to see what more he can get out of its inspirations before moving onto a new phase for his career.

Country in tone but very folky with regards to its aesthetical influences, Fly Away is a smashing listen that gets me excited about Americana again after growing disenchanted with the style in the past few years. There’s a lot of unevenness in the American underground at the moment, but with the gifts he’s been blessed with I think Chris St. John is giving true fans of pastoral country music exactly what we want this June, which is quite the tall order for any artist to fill.