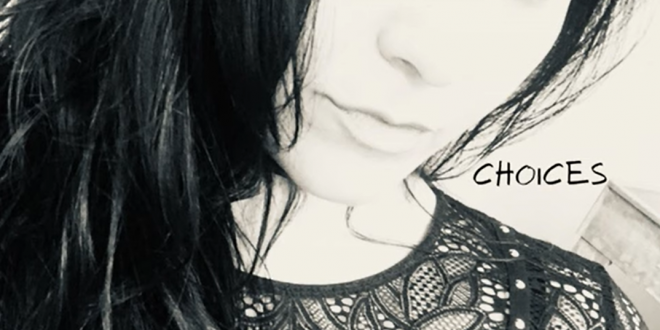 How appropriate to have a song titled “Choices” when it comes to the indie music scene. There are literally millions of songs to choose from on a daily basis. Australian singer/songwriter extraordinaire Bloom makes things easy – “Choices” displays Bloom’s natural innocence with a song that collides with dramatic scenarios and human emotions. She sings of strength and personal reflection. Laid over a music base of moving light, a cascading rhythm and a beat that drops like the sound of a jump rope, Bloom is nothing short of wonderful.

Bloom’s single is the kind of song that is full of dazzling, meaningful lines. One line that stands out: this is your moment, let it out. Athletes of the world will know those lines; they have practiced that mantra over and over. I think other musicians, artists and actors, too, relish in that time to shine. What struck me too, is the overwhelming sense of light that Bloom casts in this song. It’s like if it were a camera, it would catch all the dancing colors of the sun reflecting. “Choices” is enlightenment put to sound. With its airy tones and hints of sparkling, wispy keys, Bloom creates a channel whereas pop, adult contemporary, Christian and New Age genres converge. She truly makes it her own. I can see why so many music critics are falling for her unique vocal delivery. She has a bit of a bluesy sound, yet she’s perfect for the pop world or for younger or older listeners alike.

As the song flows, Bloom’s expansive voice grows. I really felt like her moniker fits her, especially with this song. It starts out mighty, maybe a bit modest, and by the song’s end, it’s really grown or bloomed into a fulfilling song. My cup runneth over. I felt so content and filled up, inspired by the song’s end. I can’t think of a better song to replenish your soul after a tough day, or during a time when your mood needs lifting. “Choices” is one of the many reasons that music connects and can be a life changer. Or in some cases, a life saver. Bloom’s song seems to reach out to the lonely, the disenfranchised or the depressed. I can see this song being a difference maker for an individual really struggling. Bloom has really opened my eyes and ears to a sound that just felt so good on so many levels.

Bloom, whose real name is Amanda Canzurlo, is originally from Perth, Western Australia. In addition to her original songs like “Choices”, “Love Is A Lie” and “One More Place”, she performs a live show covering the hits of Stevie Nicks, Linda Ronstadt and Carole King. She’s also been known to sing from the Adele and Amy Winehouse songbook. Whomever she’s covering or tributing, “Choices” puts her on the list for having one incredible song. I’m just in awe of her talent. Global audiences will love this one. As if they had any choice – “Choices” from Bloom spreads love.