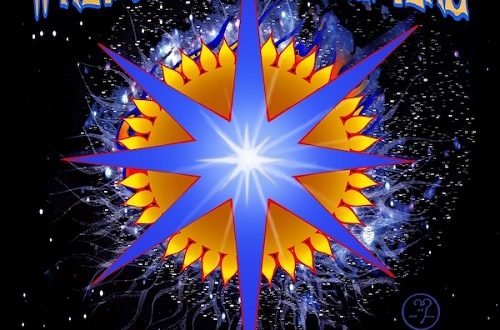 When the Sun and a Blue Star Collide is an excellent and even rather painterly title for Wreckless Strangers’ debut. The California located six piece, a conglomeration of some of the state’s best musicians playing blues and its progeny, are simply five-star musicians delivering a covers album. Instead, they’ve cooked up fourteen songs of original material that, as the title implies, mix the hot and cool with memorable results.

Fourteen songs may seem a bit much. Wreckless Strangers, however, are never self-indulgent and the tracks drive to their respective points with grit, soulfulness, and rambunctious enthusiasm. “Sun State” serves notice that they aren’t treating any of this as an one-off or throwaway effort. The Strangers draft Charlie Musselwhite to supply some of his high octane blues harmonica to their rough and ready romp and he punctuates the song accordingly.

They aren’t an one-note outfit, however. “My Art” is a literate and thoughtful look at craft for any creative individual – it has universal application extending far beyond the musical. The song naturally focuses on that, however, and David Noble’s emotive vocal locks into the almost lyrical backing with uplifting results. Following the opener with this track is a smart move and establishes an immediate identity for the band.

Drummer Mick Hellman and producer Colin Linden achieve a drum sound on the album that becomes one of its lynchpins. “Ain’t No Thing” illustrates that better than most and proves the old adage that a band is only as good as its drummer remains as true as ever. Hellman’s subtle accents never threaten to upsend the song or sound showy; you don’t even really notice them, per se, because nothing calls outsized attention to such moments. They are, however, woven into the song’s fabric and integral to its appeal.

“Mudluscious” is an even better illustration. Hellman’s drumming lays down a groove that will hook many listeners from the outset and his consistency throughout the cut is one of its greatest attributes. It’s a fun number and one you’ll want to come back to. “Alexa” returns the band and listeners to much more conventional ground, although there’s a generous amount of musical inventiveness underpinning the track. Like other cuts on When the Sun and a Blue Star Collide, it doesn’t create a bunch of ballyhoo, but rather leans on understatement and taste to make its mark on listeners.

“Raw Deal” has a bit of an outlaw on the run feel in its lyrics and that’s a favorite for many. Particularly when it’s coupled with this sort of rootsy musical arrangement. Amber Morris plays well with the song’s storytelling elements. One of the album’s most interesting forays into rock territory arrives with the track “Mountain Song”. The likely origin of the track, Joshua Zucker’s bass line, sets the stage well for everything that follows. David Noble and Rob Anderson’s guitars share such similarities with one another that it’s difficult to tell where one guitarist ends and another begins, but attentive listeners will get it. The album, as a whole, rewards our attention. It’s a model of steadiness, especially for a debut. Veteran musicians and songwriters can be expected to betray at least hints of hesitation or uncertainty, but this is a new project, a b-a-n-d, and yet they sound as confident as can be. Wreckless Strangers know what they have with When the Sun and a Blue Star Collide and so will you.