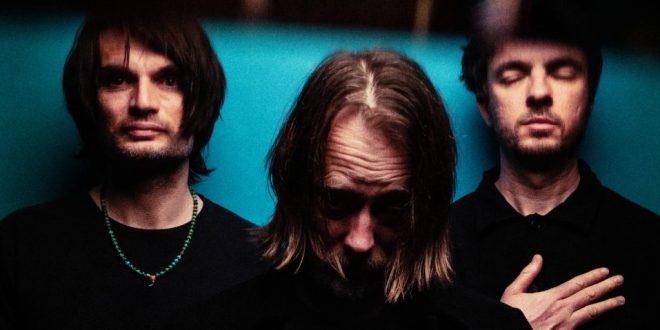 With their current UK/Europe tour underway — including a recent UK performance described by Clash magazine as “a masterclass and a privilege to behold” — The Smile has expanded its 2022 tour to include an extensive North American run.

Tickets for the newly announced dates will be on sale to the general public from June 17. A full listing of North American tour dates is below. For further information, pre-sales, etc., go to thesmiletheband.com.

Thom Yorke, Jonny Greenwood and Tom Skinner’s first tour of the U.S. and Canada as The Smile comes in support of the new band’s debut album, A Light for Attracting Attention, which was released digitally May 13 (and will be available in physical formats June 17th), via XL Recordings to unanimous accolades.

Produced by Nigel Godrich and featuring additional critically acclaimed singles “You Will Never Work In Television Again,” “Skrting On The Surface,” “Pana-vision,” “Free In The Knowledge” and “Thin Thing,” A Light For Attracting Attention features strings by the London Contemporary Orchestra and a full brass section of contemporary UK jazz players including Byron Wallen, Theon and Nathaniel Cross, Chelsea Carmichael, Robert Stillman and Jason Yarde. The Smile began their 2022 European tour on May 16th in Croatia with UK dates in London, Edinburgh, and Manchester, before heading back into Europe, finishing their headline shows in Taormina, Sicily, on July 20thand with a final UK date in London’s All Points East on 28th August.