Sp8ce Owl’s single “70’s Somewhere” is another intensely physical EDM instrumental from this newcomer. Owl debuted in 2021 with a well-received EP entitled A Future’s Past and has set an impressive pace since then with a full-length album titled A Room Without Walls following soon after. This single hails from his latest EP release Quantum Fluctuations and comes on the heels of a successful predecessor “Miami 1987 (Earth 246)”.

It’s also my first exposure to Owl’s music. I’m not normally a fan of EDM, but found myself quite taken by the assertive slant present in his music. It reverberates throughout your body without ever coming across as if it is attempting to pulverize listeners into delirious submission. It seems to me producing first class music in this style while never exclusively catering to the physical is a notable accomplishment.

His ample use of melody is one of the crucial factors setting Owl’s work apart from the pack. Synthesizers carry the melody without ever sliding into the shrill amateurism and the contrast they strike with the other electronic instruments gives the song immediate density. It’s light on its feet, however. There’s nothing ponderous about Sp8ce Owl’s musical attack. “70’s Somewhere” is a dazzling tapestry of sound that engulfs listeners fast.

It reaches for a retro vibe and latches on tight. It doesn’t sound like he’s interested in rank imitation, however; it’s a re-envisioning of the decade’s music from a much younger, yet sympathetic, perspective. You can shut your mind off and move, enjoying the music, but it’s as possible to pay careful attention and hear the near-orchestration Owl achieves with this song. It’s a stunning display of how far he’s come in a short amount of time.

The accompanying video for the song mixes an assortment of visuals. Space themes dominant the imagery, but Owl blends “found” footage into the promotional clip as well. It has a distinctly DIY quality, yes, but it’s well-chosen accompaniment for the single. It further illustrates that Sp8ce Owl is a writer and performer possessing a singular vision and it’s difficult to imagine him embarking on any recording without having some all-encompassing design in mind.

Possessing the necessary talent to pull this off so soon marks him as a transformative talent. I don’t expect he’ll confine himself to EDM alone, though I do believe he will continue returning to the style from time to time, at least. It’s a natural fit for his gifts. EDM performers need the spark of inspiration in their music to give them that added push, just like any other musical genre, and Owl has that in abundance.

It’s hard imagining that he’ll exhaust that creativity anytime soon. Three significant releases into his career in less than two years and there’s no signs of Owl’s flame burning low. His talent lights up “70’s Somewhere” from the first and gains a lot from repeated listens. It’s going to be a blast following Sp8ce Owl from this point and seeing just how far he can take his music. 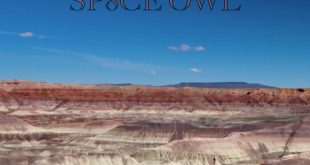