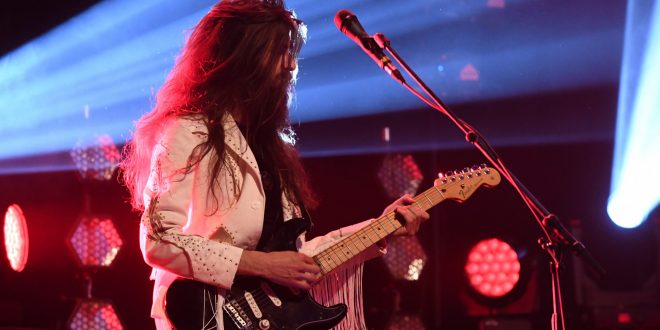 Bringing together artists and industry professionals from around the world, Canadian Music Week celebrated it’s 40th anniversary with an elaborate in-person conference and festival this week in Toronto. And while the daily panels and keynote speeches were informative and worthwhile, it was the nightly line-up of concerts and showcases that really kept the music nerds at bay.

Kicking off this year’s CMW Fest was everybody’s favourite Rush-inspired dazzling duo, Crown Lands. Headlining the official opening party at the Phoenix Concert Theatre, Crown Lands rocked the Tuesday night crowd with their swanky lasers, extended prog-rock jams and perfect outfits that had just the right balance of rhinestones and fringe. Listening Crown Lands is one thing but witnessing their performance live is an entirely different experience.

The band was a perfect pick to open CMW, an event which hasn’t been in person since 2019, and has yet to highlight the success that Crown Lands has seen over the past 3 years. Between the album and EP drops, praise from rock n’ roll veterans and a lucrative touring spot on Greta Van Fleet’s upcoming tour, the success of Crown Lands has only just begun to flourish. Plus, the band’s drummer/vocalist Cody Bowles, participated in the Indigenous Music Futurisms panel to discuss their part in the growing Indigenous music landscape.

The week showcased more rock bands on the rise with performances by Excuses Excuses, BRKN Love, JJ Wilde and The Onyx Experience which highlighted Black artists in the rock and alternative space. The event premiered a concert film, hosted a Q&A and focused on artists like Fefe Dobson, The OBGMs and the mysteriously electrifying Sate.

To conclude an epic week of nightly shows, daily panels and too much coffee, saw three nights at the legendary Massey Hall featuring a Canadian band with the most glamorous resume of them all: The Glorious Sons. In case you lost track, The Glorious Sons have opened for The Rolling Stones three times now and after witnessing the band live it’s clear why Mick and Keith keep asking the Kingston, Ontario natives to join them on the road. Plus, the newly renovated Massey Hall (which can now accommodate general admission shows thanks to retractable seating) is an experience in and of itself. The 2,700 capacity venue is an audiophile’s dream and captured the grandiose of The Glorious Sons perfectly (few tickets still remain for tonight’s final show, if you’re interested).

If anything, Canadian Music Week proved that some of the most exciting live rock bands hail from north of the border. With the mainstream charts focusing on the pop-punk realm of Travis Barker and Machine Gun Kelly, let it be known that talented and authentic rock n’ roll still exists in the world. But these bands won’t have a shot if we’re not out there supporting them, buying merch, streaming songs or preaching to the choir that rock n’ roll is alive and well.

Check out all the artists from CMW mentioned above:

Katie is a Toronto based writer for Music Existence. She loves all things rock n' roll & Star Wars.
@katietymo
Previous Best New Releases: June 10
Next PHARMACOSE Laments with Fresh New Soundscapes on Third Track, “If I Were Better,” from ‘Ascension’s Constraint’!