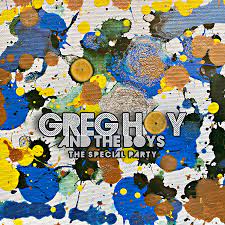 Single Review: Greg Hoy & The Boys “Jet Black, Get Back!”

There are no props, no frills, and no allusions to a deeper narrative in the music video for Greg Hoy & The Boys’ new single “Jet Black, Get Back!;” there are only musicians grinding away at loud, potent rock music the way it was always meant to be played. If you’ve never heard the music this band has made before listening to this all-new track, you’re in for quite the mind-blowing experience as Greg Hoy & The Boys remain true to the classic garage rock model here, and for longtime followers, this single represents another reason to believe that this band is one of the best in the underground today.

The rawness of the guitar parts would be reason enough for a rock aficionado like myself to get behind “Jet Black, Get Back!,” but the crippling nature of the melodies isn’t the only exciting element for us to behold in this release. Hoy is throwing down a lot of thunder with the verses that stands up to the intensity of The Boys’ play really well, and it always feels like we’re listening to a collective effort as opposed to a solo project meant to point all of our attention towards the singer alone, which is nice to hear in rock these days.

This band is only getting tighter and tighter as time goes by, and although I think they were already turning in a lot of quality content ahead of this single, there’s no debating their credibility in “Jet Black, Get Back!” as it stands beside all of the other rock music hitting record store shelves this month. Garage rock is the fiercest, loudest, craziest precursor to the punk movement that a group can take influence from, but in this release, Greg Hoy & The Boys aren’t paying tribute – they’re starting a legacy of their own.