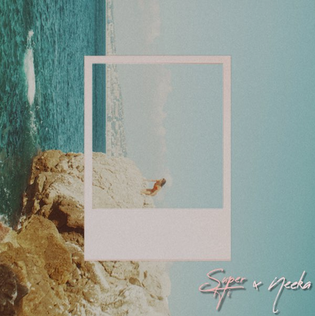 The mild indie rock cues that we encounter on the instrumental side of “Following the Sun” are a warm introduction to the chemistry between collaborator Super-Hi and Neeka in this performance, but there’s a lot more to this track than its use of rock rhythm and poppy melodies. “Following the Sun” is a track that lives and dies by the girth of its groove, and yet there’s such a simplistic feel to its structure that classic pop songs of yore immediately come to mind when breaking down its bones. All in all, this is debatably as timeless as it is meanderingly different.

Lyrically speaking, this is not the most elaborate pop song I’ve listened to this year, but certainly something that garners a little more attention after giving it a close examination on stereo speakers.

The story unfolding here is one that becomes almost determinedly musical from the get-go, and I would even say that the lyrics wouldn’t work well on their own without these harmonies to give them a bit of backing. It’s rare for pop collaborations to be as dependent on verses as this narrative tends to be, but then again, experimental efforts like this are scarcely as good as “Following the Sun” most definitely is.

I didn’t know much about either Super-Hi or Neeka before I listened to this single, but I’m curious about their skills after checking out the depth of “Following the Sun.” This is a song and music video that ask little more of the audience beyond allowing its groove to intoxicate us, and although I usually look for a more stacked arrangement in this style of music, the simplicity of both the production quality and the construction of the hook are pretty intriguing to come by right now. “Following the Sun,” simply put, is pop at its most clean-cut and accessible.