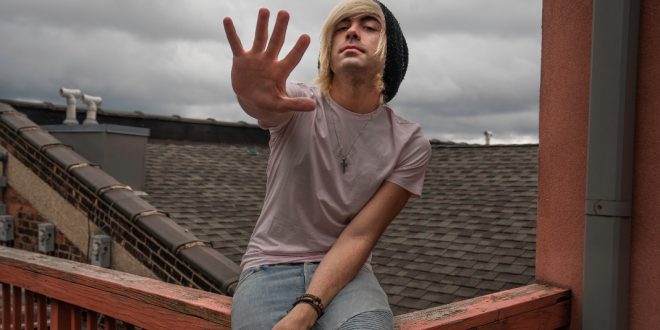 Cleveland, Ohio’s Morning In May is back with his brand new single “Deterior Design”. For those not familiar, Morning In May (often stylized MIM) is the musical vessel of singer-songwriter Jake Bartolic. Known for descriptive lyrics that bring songs to life in a cinematic way, MIM finds himself at the forefront of modernizing pop-rock.

After building an industry pedigree including touring stints with Warped Tour ’18 alongside names such as Hawthorne Heights, Underoath, and August Burns Red, along with headlining shows at Hollywood’s Whiskey A-Go-Go and performing at Launch Music Conference, MIM found himself at a crossroads. “‘Deterior Design’ is a song I’ve had in my pocket for a while,” explains the vocalist. “I wrote it after I fired my label, manager, and bandmates all within a couple months. I didn’t have anyone telling me what it should be.”

Musically, “Deterior Design” is a blend of trap pop, crunching guitars, and soaring vocal hooks. “I got to write a pop song with my heavier influence. Something purely mine,” says MIM. “I wrote this song about how good it felt to drop the dead weight and how liberating it is.”

Morning In May’s works include a music video for “Everybody’s Innocent Here, Don’t You Know That?,” the leading single off of the band’s 6-track EP, Somewhere In Slumber. The song’s title refers to the movie, The Shawshank Redemption. As a fan, MIM shot their video at The Ohio State Reformatory, where the film had been made.

MIM has worked alongside Escape The Fate’s frontman Craig Mabbitt in single release “Orpheus in Retrospect”, released in October of 2020. MIM has painted relationships with Spirit Airlines and Dynamic Talent and has been previously signed to Manic Kat Records and Needful Things/Tragic Hero Records. On shedding the old weight of his camp, MIM finds his newfound independence liberating. “No one was gonna tell me their “opinions” anymore,” he says. “You’re either with me or just something I shove in my furnace to keep this train running.”

“Deterior Design” exclusively premieres with Music Crowns and is now available across all major streaming platforms. Listen to “Deterior Design” on SPOTIFY or watch the video on YouTube below.

Tags Morning In May