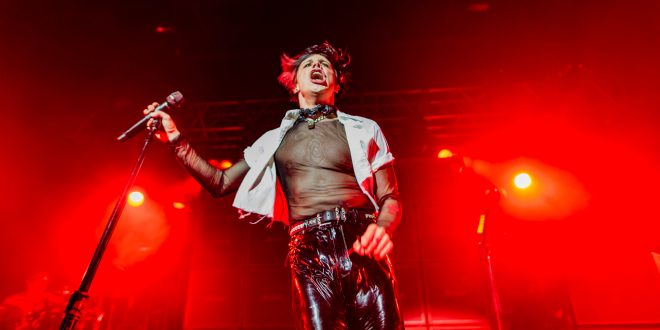 Internationally acclaimed, multiple award-winning British musician Yungblud has confirmed a third studio album is on its way. The self-titled full length, Yungblud, will see its global release on September 2 via Locomotion/Geffen Records.

The announcement was made this morning via a livestream where the 24-year-old Doncaster-born trailblazer received a tattoo on his ribcage from one of the world’s most sought-after artists, Emily Malice. The livestream commanded viewers from all over the world and marks an exciting new era for the groundbreaking artist. Watch the announcement HERE.

Currently, on his sold-out Life on Mars European tour, before heading to Australia, New Zealand, and Japan this summer, Yungblud will return to North American shores this fall for select dates as well as festival appearances at Austin City Limits, Louder Than Life, Riot Fest, and Firefly Music Festival. For a full list of tour dates go to: www.yungbludofficial.com/tour

Earlier this month, Yungblud released his latest single “Memories” ft. WILLOW. The track, which surpassed 1 million streams in it’s first week, was accompanied by an official music video directed by Colin Tilley. Speaking on the song, Yungblud revealed: “This song is about letting go of past traumas you may have experienced and voicing them to the world. There’s something freeing about turning painful memories from your past into lessons for your future – I want people to scream this song out and it be cathartic. It’s about coming together and shedding pain, turning it into positive energy and sharing the burden with each other.”