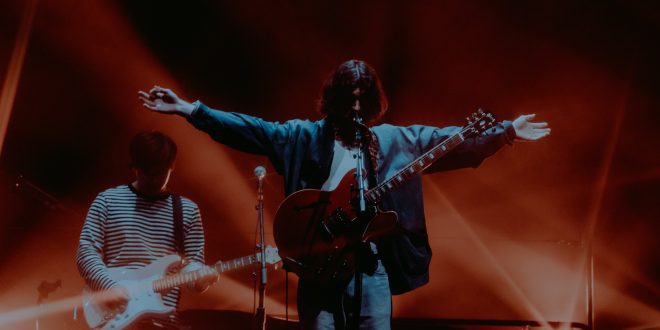 Living in the age of Covid has proven to have its unexpected curve balls time and time again. One of them is show cancellations and while this show was originally set to take place on March 4th, Mayer coming down with Covid pushed it back to May. In between Celtics playoff games and the Bruins, TD garden made time to welcome Alexander 23 and John Mayer to the heart of Boston sports.

Alexander 23 is an artist that’s been on our radar (or more appropriately – in our atmosphere) for the better part of the last three years. We got our first exposure to Alexander 23 when he joined Omar Apollo for his headlining tour in 2019. Following almost immediately, we watched Alexander 23 rock the crowd at two back to back sold out nights opening for Chelsea Cutler. After seeing him dominate the stage three times opening for artists we love, we were more than ready for a headliner. While Alexander 23 had plans for a headliner that year, 2020 had other plans for all of us. Fast forward to 2022, that headliner did come and we loved every second of his stop at the Royale.

We unabashedly love John Mayer and to see that Alexander 23 would be joining for this run, we cleared our calendars immediately for both nights. Even though Alexander has proven his capabilities of opening a show time and time again, opening at TD Garden for 20,000 eager John Mayer fans is no small task. Alexander took the stage by force and kicked off the night with “Cry Over Boys” from his last EP, Oh No, Not Again! As if performing this opening track proved his worth, conversation amongst the crowd ceased and all attention in the arena shifted toward him.

A self admitted Mayer fan, Alexander shared how important this tour was to him after spending his childhood teaching himself guitar with John’s songs. Continuing to power through his setlist, Alexander 23 pulled out “Girl” and “Dirty AF1’s” from his first EP as well as his newly released track, “Crash”. To close out his stacked ten song set, Alexander 23 gave the crowd a cover of Tears For Fears “Everybody Wants to Rule the World” accompanied by John Mayer which got the whole crowd roaring for more.

While all good things must come to an end, we were sad to see this night go after an amazing performance from each artist. We hope to see each artist come to Boston again soon and we’re making sure we catch Alexander 23 on his festival circuit this summer.