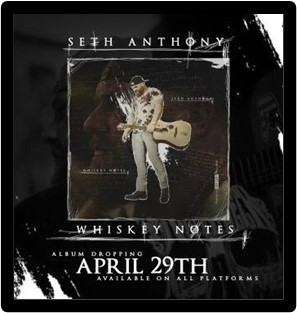 It’s been a couple of years between drinks for Seth Anthony’s legion of fans who have been desperately yearning for the follow up to his last album ‘2020 Vision’. That moment has finally arrived with the release of his astounding new EP Whiskey Notes.

With nearly 500K monthly streams on Spotify and millions of views on YouTube, the collection of 5 tracks continues to deliver on his unique fusion of country and rap. Based out of Florida and influenced by the deep honesty and melodies of Johnny Cash plus the lyrical mastery of Eminem, Whiskey Notes explores the struggles and hardships of a life well-lived, and how, through hard work and dedication, you can get to the other side.

Produced by Ryini Beats, the EP features the work of Canadian heavyweight rapper Merkules and the equally versatile Hard Target. Bringing that level of talent alone to the release is more than enough to guarantee its place in the charts as fans of both Country and Rap will flock to it. Stripped back to its bare essentials but with subtle beats that match his lyrical flow, Seth paints a picture that is gritty, organic and authentic.

Telling tales of a broken man who just doesn’t give up, the raw emotions of the opening track relentlessly flow through the entire release. Painting a picture that demons are within us but it is the strength to confront them that is important, the addition of Merkules on Last Breath and Hard Target on Real Life is that extra flavor which will linger long in the memory.

When life gives you trouble, let Seth Anthony guide you to a better place. There is nothing finer than taking a moment to enjoy his work and having a taste of his Whiskey Notes.