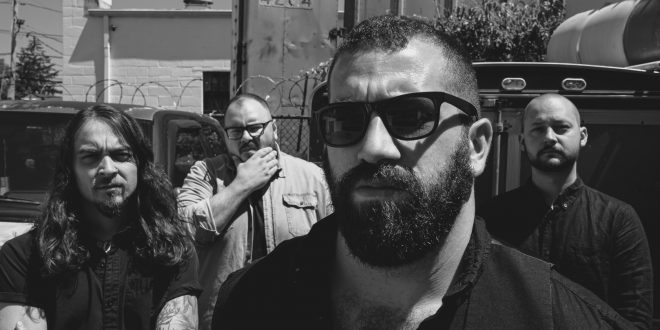 “There’s nothing more precious in life than finding your true purpose,” explains vocalist John Carbone of the themes behind the raucous track which made its debut via Jose Mangin’s Liquid Metal yesterday. “It’s a miracle in and of itself. Equally impacting is the misery of finding it and then being kept from it. When I’m home, sleeping in a comfy bed in my comfy apartment, I toss and turn furiously feeling in every sense of the word, restless. But touring all these years, sleeping on filthy hardwood floors in punk houses, wearing the same sweat-drenched show clothes from days ago, I sleep like a baby because my heart, mind and spirit are nourished. Of course, it’s important to remember my privilege: I have an apartment, a bed, and I am grateful, but I have worked to put food on the table doing things I hate and having found true purpose, I think it’s reasonable to want to work my ass off at that for survival. ‘Alpha Howl’ is about emotionally, philosophically, and spiritually starving to death.”

Speaking to the background on yet another creative and impressive video, guitar player Nick Lee says of the Tom Flynn-directed clip: “We had been working through a few more ‘serious’ video concepts for ‘Alpha Howl’ but once the ‘Goodfellas’ idea happened we just couldn’t stop laughing and knew it was the winner. We’re four Italian-Americans from Long Island so that movie is just essential and over the years we’ve fielded plenty of jokes around having a ‘Carbone’ and a ‘Romanelli’ in the band. I remember one interviewer making a joke about reading the names and thinking ‘what is this, the Long Island mafia?’ It’s obviously not meant to be tied to the lyrics or anything but it was incredibly fun to make and we hope people will get some laughs out of it!”

Moon Tooth have been praised for their unique spin on prog/metal, with Rolling Stone saying “not since the early days of Mars Volta has a rock band managed to sound so wildly adventurous,” Pitchfork noting that the “band bursts with enthusiasm and rabid energy, as if Mastodon’s apocalyptic visions were replaced with cosmic wonder,” and Revolver dubbing them as “awe-inducing.”

The Long Island-based band have released a trio of songs in advance of the 11-song collection’s release: “Carry Me Home” via a vampire-infused video, the psychedelic clip for “The Conduit” and the narrative piece for “Nymphaeaceae.”