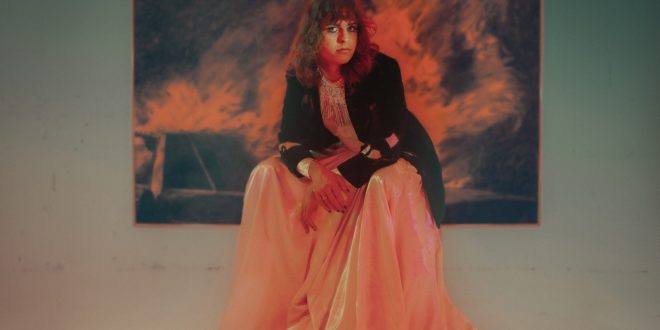 In the competitive cluster of New Music Friday tracks that litter our feeds and streaming service playlists, it is often hard to stand out amongst such an array of new music. This past Friday in particular presented an overload of options, and not enough hours in the day to listen to everything released. Despite the initial overwhelm, there was one album in particular that emerged from the masses as a new artist to divert your attention to. The debut full-length album I Don’t Want You To Worry Anymore by alternative artist Mothé -pronounced ‘moth’- was released April 8th via Slowlab Records. Their singles “Debt Collector” and “It’s Okay To Be Lonely” have garnered millions of streams online, signalling an exciting rise for the independent artist.

After finding success as a touring guitarist for groups like The Wrecks, Mothé, the project of musician Spencer Fort (they/she), is now making a name for themselves as an up-and-coming artist in the LA indie scene. Previously a member of the Houston, Texas-based band Moth Wings, Mothé is both the natural follow up and an exploration for Fort. Working in conjunction with collaborative producer Robert Adam Stevenson, the pair have released I Don’t Want You to Worry Anymore on their own label, Slowlab Records, which will also see the duo produce and release music by other artists as well. Together, they’ve created a unique sound that soars in its highs and dives deep in its lows, all while presenting as one cohesive, and contemplative body of work.

This 12-track LP impressively ranges in sounds, as it easily flows from indie pop, to singer-songwriter ballads to pulsating, alternative rock tracks. The heartbeat of the album lies in Mothé’s lyricism, drawing heavily from their personal experiences and battles with addiction, identity, and relationships. Out of the darkest moments arose beautifully candid music and accompanying visuals, as seen in Mothé’s music videos and general aesthetic. There is a palpable state of dreaminess ever present in each track, as many of the songs utilize synth atop layered effects and pop-oriented hooks to create an often haunting essence. Although sonically it could be concluded that many of these sounds were achieved via a computer, Mothé adamantly insists on using an analogue approach to their recording, as to truly capture each sound in the room.

There is a duality in all of Mothé’s music that encapsulates what this project is truly about, namely contemplating the human experience. This is exemplified in tracks like “Leave a Little Later” where we hear their polished vocals turn raw in a primal and beautifully human twist of emotion, and “Dancing on an Empty Floor”, the album’s effervescent indie pop opener. The punchy drums tracked in “Somewhere In Your Dreams” generate all the effects of the high you seek in alternative rock, yet the lyrics, if you chose to listen closely instead of getting swept away in the song’s allure, drag you back down in that polarizing effect Mothé is so good at. Each track on the album urges listeners to wistfully dream, while simultaneously snapping you into reality. The most outwardly gripping track on the album also happens to sit in the top spot of Mothé’s most-streamed songs on Spotify and Apple Music. “Debt Collector” captivates you with its layered sounds, rich vocals, and pop-punk-meets-funk inclinations. The track builds a predisposition for Mothé’s signature sound and brings life to the album whilst penning a rather pensive pop song. I Don’t Want You to Worry Anymore is an impressive collection of songs from a new alternative artist on the rise. Listen to Mothé’s debut album out everywhere now.