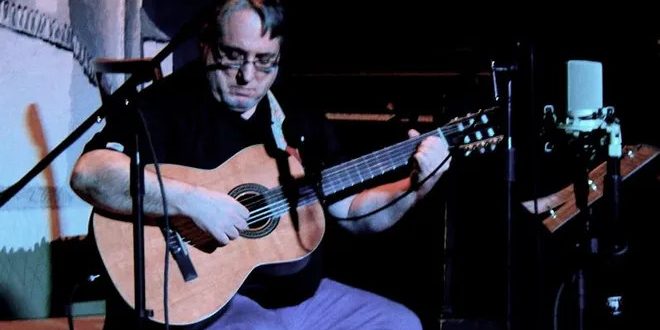 Since 2009, Michael Gutierrez-May has presented himself as an empathic and insightful folk songwriter, though he’s been entrenched in the folk scene for almost 30 years as a dedicated behind-the-scenes force. “My lack of confidence held me back in the past, but I never completely gave up on myself,” the Massachusetts-based artist reveals. “Once I started writing songs more consistently, however, I felt like I could make my contribution to music and songwriting.”

Michael is a gifted storyteller, writing lyrics that make you stop and think about people and the world around us. His background as a mental health therapist informs all aspects of his music. His latest album, Drifting to the Right, is his 4th album and boasts of 9 songs and 11 special guests, including former Joe Cocker musical director and guitarist Cliff Goodwin and vocalist Colette O’Connor.

Drifting to the Right is a commentary of the political upheaval and self-knowledge. More than half of the songs speak on the state of politics, while only a few speak on more personal issues. The song “Drifting to the Right” is about how someone’s anger leads them to the political right. Its harmonic and country-folk sound reveal a sadness to it, that people are moved by internal forces as much as they are by external ones.

Another song, “Imaginary Tomato,” talks on Michael’s own feelings on politics, written during the last Presidency. “This was inspired by arguments I would sometimes have and I would also imagine others had with their partners after going crazy related to something Trump said or did while he was president and the other partner having to calm them down,” says Michael. “I was in DC visiting a friend shortly after Trump was elected and after passing the Trump International Hotel on Pennsylvania Avenue, I had a very strong urge to throw a tomato at it, but then it would have to be an imaginary tomato so I wouldn’t get into too much trouble.”

He recently released the lyric video for “Imaginary Tomato” which you can watch on his YouTube channel now.

Stephen Vicino is the founder of MusicExistence.com. He created this site to give talented musicians a voice and a way to be discovered.
@@svicino
Previous We Are Reeling Over ‘Remissions’
Next The Sheepdogs announce new album Outta Sight, due out June 3rd, first single “Find the Truth” out now.