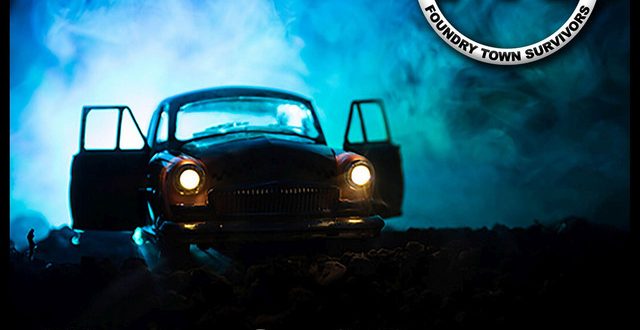 The call of the open road can’t conceal the secrets beyond the lyrical substance of the new single “Hopes and Dreams” from Foundry Town Survivors, and if you take a look at the music video for the song, I think you’ll understand why I find it to be one of the more intriguingly enigmatic rock releases of the year so far. Foundry Town Survivors first came to my attention a little while ago, and while I’ve been impressed with what I’ve heard to date, this is their most mature release yet, featuring a truly engaging music video to boot.

“He was brought up strong / He was brought up right / Knew good from bad / Knew when to fight,” tells a pastoral vocal beside the strings in “Hopes and Dreams,” and although there’s a hint of Americana-style retrospection here, it doesn’t feel as hopelessly reflective as it might seem on paper. We never feel like this lyrical protagonist FTS is introducing us to is out of control; there’s something optimistic on the other side of the horizon, begging for both us and him to discover it, even if it means climbing over some steep melodic mountains along the way.

This vocal tone had me wrapped around the singer’s finger from the moment he started crooning forward, and while I like the form of the harmony here in general, it’s difficult for me to picture this single coming off the same way with a different voice leading the charge at the helm of the mix. Personality is what defines rock n’ roll of this variety, and when taking into account just how much soul is embedded in the execution and presentation of these lyrics, you cannot dismiss the credibility and unique qualities offered to us by “Hopes and Dreams.”

The beat here certainly adds to the haze over the main melody, and I would even argue that it’s one of the more psychedelic-tinged elements on the backend of the mix. There isn’t a lot of spacing between the percussion and the lead vocal, and yet it doesn’t feel like the drums are tethered to the verses as much as they would be in a country song, or even something sporting a Bakersfield sound. As unconventional as it might be, there are shades of traditions in “Hopes and Dreams” that start with the likes of the Flying Burrito Brothers and persist in alternative rock and indie country today.

Minimalism is taking over the artistic spectrum in indie rock, but this conservative release from Foundry Town Survivors doesn’t match the bill for what a lot of trend-seeking players in the industry have been producing all year long. This is very much a band that can appreciate indulgence when they’ve got something to do with it; this is just an instance where it would have come between artist and audience in a negative fashion. These guys are putting the music ahead of everything else in “Hopes and Dreams,” which isn’t something I can say for their competition this spring.