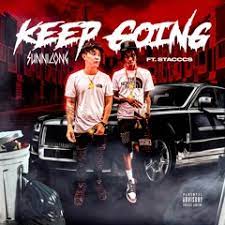 Old school hip-hop was mostly defined by grandiosities both sonic and lyrical the same, but this just isn’t the case with the modern generation of the genre. In 2022, it’s better to go lean and mean than bombastic and indulgent, and if there’s one rapper in Canada who knows this better than any of his Toronto peers, it’s likely SunniLong. SunniLong’s new single “Keep Going” with Stacccs is light on the instrumental frills, but what it presents in its chief lyricist isn’t just dynamic for the style of music he’s making – it’s a nod to the pop framework that makes people famous.

The music video for “Keep Going” is straight Hollywood, with the props and external narrative to boot, but it doesn’t deviate from the stylistic framework of its source material for a second. To break away from the common in any given scene, you’ve got to be willing to experiment with your identity, and while SunniLong could be a little pushier on this end of his artistry, I like the ambitiousness that this video shows off so liberally. He’s got the charisma to do big things; now it’s just a matter of getting him to try the untried.

SunniLong’s perfectionist attitude extends to the verses effortlessly, and I don’t think it’s something that could do his brand anything but good. There’s definitely such a thing as going too far with a concept, but I don’t feel like he’s in danger of bleaching the simplicity from his style just yet. He’s unquestionably on top of a rather rigid formula for making rap music, but as long as he steers clear of the avant-gardism that has largely separated the surreal from the flagrantly obtuse in hip-hop, I think what he’s making in “Keep Going” is going to build his profile up plenty fine on its own.

This master mix has no synthetic fat on it, which comes in contrast with the vast majority of new rap I’ve been hearing from the Canadian underground in the past year or so. When I say that SunniLong has a barebones sonic layout here, I mean there really is nothing coming between his verses and the audience he’s meaning them for. This could strike some critics as being a little too minimalistic for the mainstream, but I think its unique persona is what will ultimately bring a lot of jaded American rap fans over to this player’s camp.

I was not anticipating hearing such a gem out of SunniLong’s scene so early on in the year, but in “Keep Going,” he shows us that he has the drive to break free from the underground and enter the primetime spotlight a lot sooner than some of his rivals will. Stacccs is a good collaborator here, and I think both of these artists are able to draw a lot out of each other in this single than they would have on their own. There’s time left for him to grow, but for now, SunniLong needs to be considered a contender at any rate.

Previous Single Review: Bosco “Raven” And “Wicked Woods”
Next Ricky Duran Shines like a Star on his debut album ‘Space and Time’