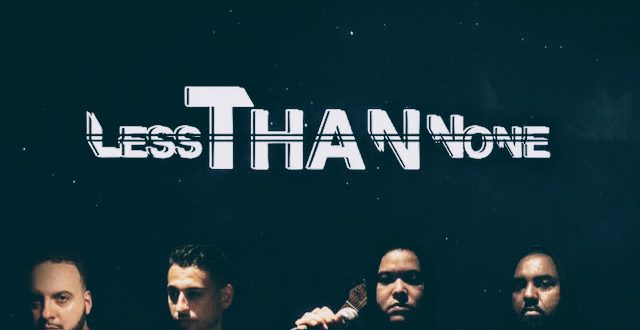 Bronx metal-core mainstay Less Than None has signed with Sonic Decoy Records and dropped their latest single “Aware“.  Lyrically, the track is all about being present in the moment and surrendering your attachments into the conscious awareness of now in hopes to trigger a spiritual awakening.  “Aware was a very challenging song to write for me. I would argue it is my most spiritual song,” explains vocalist Carlos. ” Aware is about connecting with your high self through self-awareness. It’s about the differences between ego and the self. You are not our thoughts, you are just the observer of them.“

Since the band’s inception in 2011, Less Than None has had a tremendous impact on the underground music scene of NYC. Less Than None has been featured on media outlets such as Bullspike Radio & Greece’s Metal Therapy Radio as well as performed at the famous Webster Hall and headlined the Gramercy Theatre. The band has performed and worked with a number of artists including Angel Vivaldi, Ghost Ship Octavius, The Bloodline, and A Killer’s Confession among others.

After signing with Sonic Decoy, Less Than None has plans to release an EP in Summer of 2022. The music from this upcoming EP was recorded at Backroom Studios in NJ and mixed/mastered by Kevin Antreassian (Dillinger Escape Plan). The EP documents a period of growth for the band. “If our HANDS ON FIRE EP was our caterpillar phase, then our upcoming EP is our cocoon phase,” explains the band. “We’re in the midst of re-discovering ourselves musically and thematically post-COVID times. Shedding who we once were, and preparing for something greater. Our mission is to continue releasing new and exciting music that impacts everyone, from our closest friends to strangers around the world. Join us as we create a musical escape for audiences to enjoy!”

“Aware” was premiered with Music Crowns and is currently available on all streaming platforms. Listen to “Aware” on SPOTIFY, or on YouTube below.

Less Than None Is:

Connect With Less Than None: