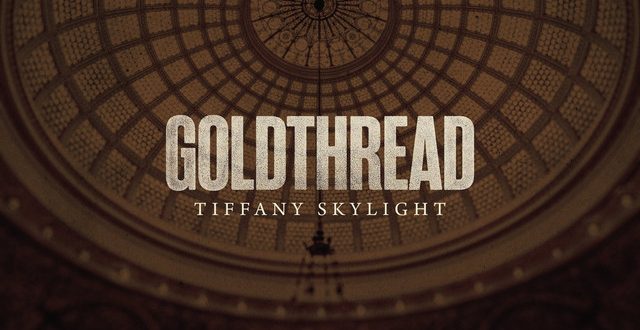 The last few years have seen a lot of minimalism penetrating the rock n’ roll underground, and the new single from Goldthread, “Tiffany Skylight,” is a good example of what I’m talking about. Goldthread’s sound isn’t wholly defined by chamber concepts, as is the case for the majority of the indie rock contemporaries at the moment, but instead by a general insularity that relates more to classic post-punk than it does anything in the contemporary surrealism movement. It has the look and feel of pandemic pop, but make no mistakes about it – there’s a lot of muscle lying just beneath the surface here.

I suppose the biggest difference between “Tiffany Skylight” and the other anti-indulgence rock singles debuting in 2022 is how it appropriates its strength. Rather than trying to bury any sense of physicality away from the listener, it’s merely controlled by the tempo and tone of the instruments here, which allows for a much grander video adaptation of the song than would have been possible otherwise. There’s no fear of winding up with too much of a good thing in this release because Goldthread’s efficient attitude as players and composers just won’t let it happen.

This groove is undeniably concrete, but it’s not so rigid as to take something away from the flow of the lyrics. Contrarily, I think the vocalist is following the pattern sustained by the drums and the bassline quite profoundly in this performance, alluding to a chemistry between these players that’s impossible to fake in or outside of the studio. You don’t have to be a professional critic to pick up on the comradery here, but those who are – myself included – can’t help but note how terrifically all of the pieces are falling together in “Tiffany Skylight.”

These guitar parts are somewhat removed from the rest of the instrumentation, leaving a ghostly void where there would conventionally be more continuity between the strings and, at the very least, the lead vocal. That isn’t the case in “Tiffany Skylight,” as the absence of this continuity feeds into the implied lyrical narrative all too perfectly. I’ll stop short of calling it revolutionary, as it’s something I would deem sourced from the post-punk playbook of acts like the Gun Club and the English Beat, but it certainly sounds like a refreshing change of pace when observed this March of 2022.

I didn’t know about Goldthread ahead of getting into their new music just recently, but this is the kind of single and music video that definitely makes me want to keep a close eye on what they’re going to be doing in the future. 2022 is already feeling a little stagnant on the mainstream end of music, but the rock underground is providing us a real treasure in “Tiffany Skylight” that quite frankly feels like the start of a bold campaign from the likes of Goldthread. They seem primed for the spotlight here, but not at all eager to embrace the poser’s playbook so many of their peers would.