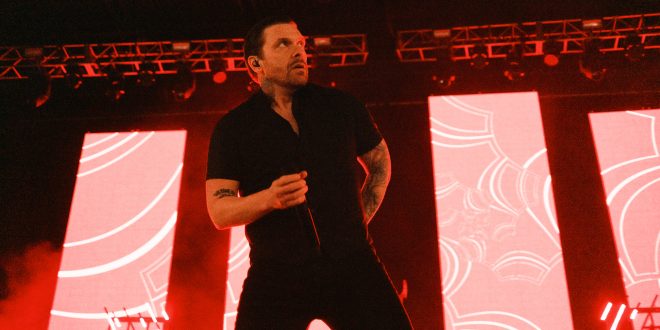 Ahead of the April 22 release of their new album Planet Zero, multi-platinum band Shinedown have announced the Planet Zero World Tour, with special guests Jelly Roll and John Harvie, and have also released “The Saints of Violence and Innuendo,” a brand-new song from the forthcoming album.

The Planet Zero World Tour begins in Bonner Springs, KS on September 3, kicking off a 20-date U.S. run of fall shows that will see the band bring their new music, fan favorites and largest production yet to cities from coast to coast in support of Planet Zero. Tickets are available today at 10am local time at www.livenation.com.

Shinedown also recently made their ATTENTION ATTENTION feature film available worldwide. A stunning visual counterpart to their 2018 acclaimed album of the same name, the film brings to life the album’s narrative about a mental health journey and the resolve of the human spirit, weaving together 14 songs into a provocative and thought-provoking cinematic story that illuminates yet another dimension of Shinedown’s limitless creativity. The film, directed by Bill Yukich (Beyoncé, Metallica, Wiz Khalifa) is now available to rent and purchase worldwide on Vimeo and is available on iTunes in select territories. It is also available on digital and cable VOD in the U.S. and Canada, and on Blu-ray and DVD – CLICK HERE to purchase and watch.