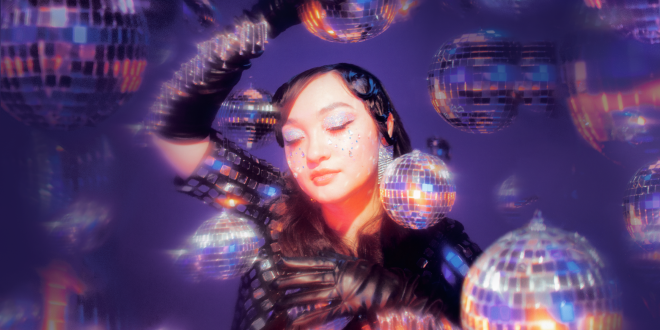 The world first met Maia, the mastermind behind mxmtoon, when she was a 17-year-old singer with a ukulele. In 2017, and from the guest bedroom in her parents’ Oakland home, the high-school student began posting covers of pop favorites and her own catchy confessional musings, tunes that spoke frankly of her setting’s assorted tribulations — dates and a lack thereof, online socializing and offline loneliness.

Today, mxmtoon returns with her new album rising, which will be released on May 20th on AWAL. The album will be supported by a US tour with more dates already added in many major cities due to demand. The now Brooklyn-based artist is also releasing a new song “sad disco” which is out today. “sad disco,” is an electrifying dance party for one inspired by the stacks of ABBA records that comforted her during her year of lost time. Backed by fluorescent synthesizers and tessellated drums, Maia offers a sharp scene of a teenager stranded at home, finding comfort in moving and singing along when “you’re bored and alone.” It’s a three-minute revelation for mxmtoon, not only for the depth of its storytelling but also for its unapologetic disco indulgence, a longtime love of Maia that she’s never brought to bear with such power. “sad disco” is music as a rescue mission.

On “sad disco” Maia tells us “i was 17 years old when i wrote my song “prom dress.” four years later, i sat and listened to it, wondering if the lyrics and ideas still resonated with my now 21-year-old self. i decided that it did, and it also didn’t. i’d grown up since i wrote that song and realized I wanted to make something that felt current to my individual. “sad disco” was the resolution to that desire. a song built with the same bones that “prom dress” was made from, but more reflective of the growth i’ve experienced in my own life since. it’s a song meant to make you find joy in the quiet, to emulate that feeling of being alone in your bedroom, blasting music through a pair of headphones in the middle of the night. in a way, it feels like an answer to the girl who wrote “prom dress” in the first place. serving as a reminder that she isn’t stuck on the floor with tears streaming down her face forever, but that she’ll grow up, and the loneliness she sometimes feels won’t define her. she can still choose to dance and have her own “sad disco.”