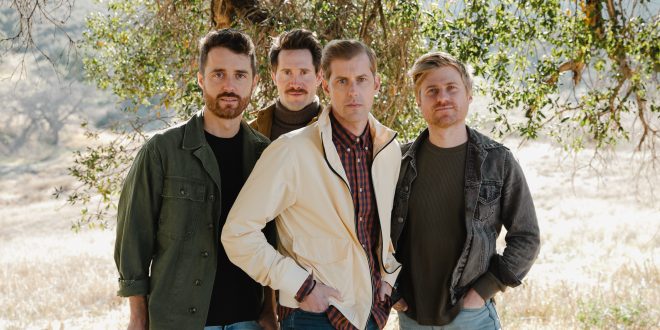 Jukebox the Ghost team up with Andrew McMahon for single, “Wasted”

Piano pop trio Jukebox the Ghost will release their sixth studio album Cheers on May 27 via BMG. The self-produced album is the result of a three-year songwriting and recording process and the follow-up to the band’s 2018 release Off To The Races featuring the lead single “Everybody’s Lonely” which charted Top 15 at Alternative Radio.

On Cheers, Jukebox The Ghost combines their memorable choruses, cheerful melodies, and Freddie Mercury-esque vocals with the hip-hop-influenced energy of Twenty One Pilots, the modern piano balladry of Andrew McMahon, and the joyful energy of Walk The Moon. The album explores getting through hard times but trusting that the chaos and low points can create new opportunities. The end result is catchy and clever pop songs with theatric undertones.

Late 2021 the band offered the first glimpse of their forthcoming album with the apocalyptic bop “Ramona,” and the anthemic title track “Cheers!.” Today, the band share the instantly catchy and youthful single “Wasted,” featuring and co-written by Andrew McMahon.

“I wrote this with Andrew McMahon and Brian Phillips about a reckless night I spent with some friends not long after first moving to New York,” explains singer/pianist Ben Thornewill before adding, “It was during Hurricane Irene and after many hours of debauchery convinced my co-conspirators to walk out onto the Brooklyn-Queens Expressway at 2am during a quiet moment in the storm. It was surreal, dangerous, stupid, and wonderful. The song is about that feeling of being young, broke, brave, and idiotic.”

Though Jukebox and McMahon have previously toured together and have crossed paths several times since, this is the first song they have ever done together. “I’ve loved Jukebox since we first toured together years ago,” says Andrew McMahon. “Getting the chance to write and record with them was an honor and I’m excited to share this song with my fans and theirs.”

The band will release the bright and fun music video featuring two upright pianos in a field just outside of Los Angeles on Wednesday, March 16 at 12pm PT/3pm ET via YouTube.