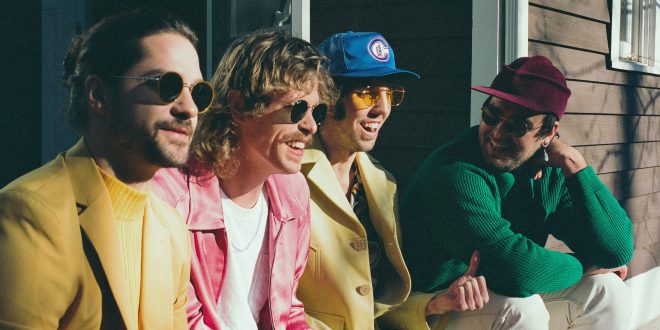 Today, Caamp have announced their new album, Lavender Days out June 24th on Mom + Pop. To mark the occasion they have shared the first single, “Believe.” The single is a rousing declaration of devotion with Caamp’s signature harmonies and lead-singer Taylor Meier’s well worn vocals at the center. They sound as assured and as vulnerable as ever. “‘I believe in you baby’ – a mantra for yourself and for the world,” says Meier. “It’s about sticking through the tough and heading for the sun.” Lavender Days is available for pre-order here today including an exclusive clear vinyl via the band’s website: www.caamptheband.com.

Lavender Days was produced by Caamp and Beatriz Artola with additional production by Brad Cook. Initial recording took place at Sylvan Esso’s studio just outside of Durham, NC beginning in February of 2021, where together Caamp and Cook workshopped the songs and began principal tracking, bringing in friends like Nathaniel Rateliff and Waxahatchee’s Katie Crutchfield to contribute vocals. When it was time to finish the record, the boys headed home to Columbus, OH to wrap it up, with help from Artola, the way they always have, in their humble home studio – just them and their instruments, in their hometown.

Lavender Days was written in the aftermath of a period of loss and heartache suffered by Meier. A great love, a great dog, his livelihood, his sanity…all gone in the same period when touring and every bit of human interaction was taken from him and the rest of the world. It was a humbling experience, and one that placed him firmly back in the spot that Caamp so often writes about – his Midwestern home and the life he lives there in the state of Ohio. It’s the romanticism that Caamp approaches that simple life with that speaks to their volume of fans and is even further ruminated on in Lavender Days. It’s about the in between days – the small pleasures and the forgotten disappointments.

Caamp will be out on tour all year beginning with a North American tour supporting The Lumineers throughout May and June – highlights include two nights at Forest Hills Stadium in New York on June 17th and 18th and a final bow later in the year at Wrigley Field in Chicago on September 3rd. The band will announce headlining tour dates, festivals and more in the coming weeks.

Previous more* share official music video for, “Really Want to See You Again”
Next Jukebox the Ghost team up with Andrew McMahon for single, “Wasted”