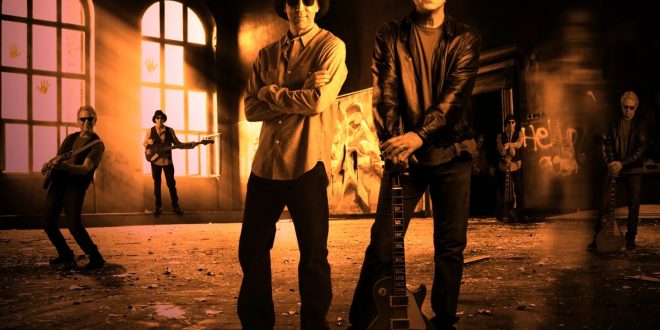 Some stories are too powerful and epic to be contained by a single song or video. Themes bleed across their albums, disregarding the barriers between tracks. Their characters make the leap from song to song, recurring, haunting the audience, drawing listeners deeper into the universe of associations that the music creates.

Foundry Town Survivors tell tales like these. Mark Tomorsky and Tommy Johnsmiller are expert short-story writers and accomplished musicians. They know how to bait a narrative hook, develop their protagonists, generate sympathy, and – of course – how to break your heart. In “Mississippi Rising,” their engrossing 2021 single, they put the listener on the banks of a raging river and made the immensity of natural forces terrifyingly palpable. On “Hopes And Dreams,” their latest, Foundry Town Survivors confront something even scarier: unchecked human desires.

Yes, once again, Tomorsky and Johnsmiller have brought desperate circumstances alive for their audience. This time, however, the characters involved have no one to blame but themselves. “Hopes And Dreams” is a caper story — but it’s more than that, too. It’s a tale of ambition, frustrated hopes, fears of aging and irrelevance, and the dark lure of transgression and adventure.What the words don’t say explicitly, the music articulates clearly. The band matches the lyrics with music that simultaneously reflects grandeur and destabilization. There’s a longing in each note, and hunger and urgency in each beat. “Hopes And Dreams” is reminiscent of classic rock, but there are notes of bewitching psychedelia and plainspoken Americana in the mix, too. The Foundry Town Survivors crown the song with a slide guitar solo that firmly anchors the song in the roots-rock tradition — even while blasting off to the stratosphere.

To bring “Hopes And Dreams” to life on screen, Tomorsky and Johnsmiller have turned to a frequent collaborator: Paul Crowder, a filmmaker whose sense of drama and story-craft matches theirs. He shows us the stretch of desolate highway, the surreptitious shots of characters engaged in nefarious activity, the intimations and threats, and the sudden eruption of violence. He’s also handy with hallucinatory images, including mirages of Las Vegas that shimmer across the desert-like dangerous mirages. But just as important are the things he doesn’t show us, including the characters’ motivations and ultimate destinations, and the consequences of their desperate acts. For that, we’ll have to wait for the sequel — and the one after that, and the one after that…

When did you first know you wanted to become a musical artist?

About two weeks ago. LOL. We never thought about it. Becoming musical artists. We’re of the opinion that artists don’t know they’re artists – they just do what they were born to do. Most “artists” that we’ve encountered all have at least one thing in common. Conviction. They totally believe in what they’re doing and have their own way of creating and presenting their work to the masses. We resemble that definition, but have no idea when we realized it…

What was the first song you ever wrote?

Funny enough, both of our first original songs were collaborations with others and it doesn’t look like the acorn has fallen far from the tree since then…The first song we ever wrote together was about a house party that got a little out of control…

Anything from Motown – while they were still in Detroit, The Who – from “Tommy” through “Who Are You”, Albert King, Alice Cooper, Mitch Ryder

We’d say, “In recovery.” Everyone knows the isolation of the past 2 years has really put a damper on things. It moved everyone online in one form or another. It became your local scene. We don’t think that’s going away any time soon. It looks like everyone’s live scene is being rebuilt right now. We’re very interested in seeing what the next year brings and where things are going to go.

Taking chances. A lot of our songs have places that allow us to let “the magic in” when we play. Even when it’s a fairly succinct song, we have to watch each other closely because you never know when it’s time for a drum solo, LOL…We like to be spontaneous and if the audience is with us, it’s the very best feeling you can have. There’s nothing like it.

“Foundry Town” is a favorite of ours. We had the first draft of the song and played it for a few friends and the reaction was almost identical. Male or female didn’t matter. We heard a lot of comments resembling, “You captured my childhood,” or “That’s how I grew up.” For us it was a look back on the moments that we discovered and came to understand our creative powers, our unique energies. It’s something we have held on to ever since.

Back in the last millennium a Detroit band called The Rockets, lead by Jim McCarty and Johnny “Bee” Badanjek – founding members of Mitch Ryder and the Detroit Wheels, were playing a show in Ann Arbor, MI. They started off rocking the joint as we knew they would. A few songs into the set, the stage power died. That meant drummer Johnny“Bee” was the last man standing and everyone else was dead in the water. “Bee” never stopped. Never missed a note. He kept the party going for almost 30 minutes. When the power was restored – the rest of the band came back in right where they left off like nothing had happened. It was almost like they planned it …

If you could meet, play a gig, co-write a song, have dinner, have a drink with any band or artist(deador alive) who would it be?

Our goals are simple – we want our own TV show.