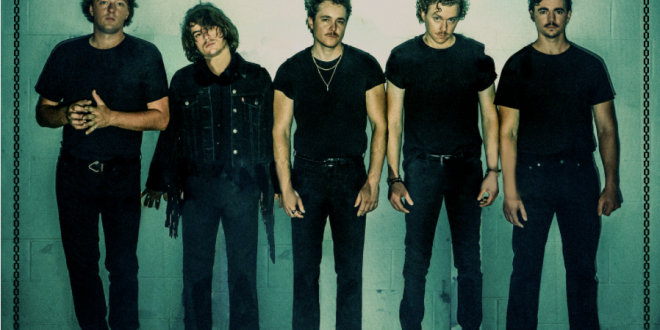 The release of Pennsylvania-bred rock band Ceramic Animal’s newest album is anything but the same old song and dance. Sweet Unknown, released March 4th, is Ceramic Animal’s fourth album and first major-label release, following up their psychedelic-tinged 2020 project, High End. Their newest LP finds the band venturing into new territory in both their sound and their ambitions.

The band, made up of a trio of brothers- Chris Regan (vocals, guitar), Erik Regan (drums) and Elliott Regan (vocals, keys)- and friends Anthony Marchione (guitar) and Dallas Hosey (vocals, bass), have established their career through a DIY approach that garnered them three LPs, successful shows, and a plethora of loyal fans. Having funded, produced, and self-released each of their previous efforts, they’ve found a new home at Nashville’s esteemed Easy Eye Sound, which is owned and operated by Dan Auerbach of The Black Keys. Guided by the expertise of Auerbach who became fixated on the band’s live performances that scattered the Web, Auerbach produced Sweet Unknown and allowed the band, timid to forgo their independence and control, to distill their sound and vision on a larger scale. The 10-track album is a comprehensive exhibition of Ceramic Animal’s talents and aspirations, as each song seamlessly weaves in and out of styles including psych rock, blues rock, post-punk, and classic rock.

The album’s opener, “Tangled” is a rolling, indie-rock track that is light enough to venture into the pop realm, yet still roots the band in their rock foundations. “I Love A Stranger” is a captivating dark disco track that shimmers against a psych-rock backdrop. “Private Dancer” incorporates garage rock energy and their DIY roots, atop a haunting production. The album’s tender moments, found in songs like “Forever Song” and the title track, “Sweet Unknown”, are emotive and gripping, and often emerge into a bigger, harmonious production that traverses any boundaries of genre. These tracks beautifully illustrate themes of introspection, longing, loneliness, and the desire for searching deeper. If there is something to grab onto here, it’s this communal desire for answers and hope that we all can relate to. “Valerie” provides the most distinct throwback sound, full of 70s flair, dueling electric guitars, raucous percussion, and glittering keys that bring it all together. It is the most outwardly classic rock sounding track of the bunch, and closes out the album like a punch in the air.

Sweet Unknown excels at drawing from past influences, while incorporating their modern, nuanced blend of sounds into one comprehensive work of art. It shines in hues of technicolor through the slow burn of some tracks, then engulfs into an explosion of sounds in others. Ceramic Animal will bring these songs to life on the road as they join The Black Keys on their Dropout Boogie Tour this summer. Sweet Unknown from Ceramic Animal is out everywhere now via Easy Eye Sound.