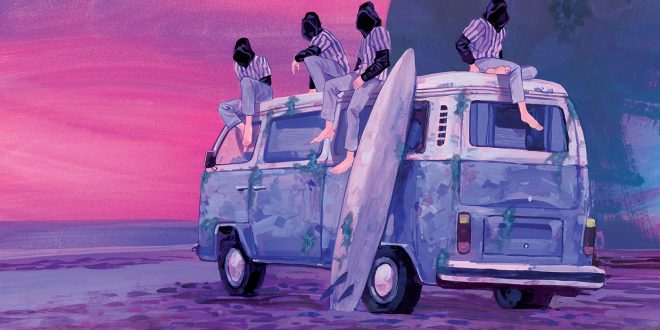 Dubbed as “70’s soaked space-rock” Toronto’s psychedelic indie rockers Lammping have released their new EP Stars We Lost  via We Are Busy Bodies. The six-song collection of fuzzed out guitar tracks pulls influence from a wide-ranging spectrum of bands including Black Sabbath and Kraftwerk. It’s trippy and weird yet still 100% acid-infused rock n’ roll. And if that wasn’t strange enough, the band seems to have sampled traditional Ukrainian folk songs into their music making it even more obscure yet unique.

Frontman Mikhail Galkin explained, “Our first records were more traditional Psych/Stoner Rock albums, propelled by guitar riffs and solos, but we ultimately always wanted to reach beyond that. We love Sleep and Sabbath and King Gizzard but we also love De La Soul and Madlib, for example. The approach for this record was much closer to 3 feet High and Rising (De La), where we look at all the ideas and sounds we have in our minds almost as samples. Once you approach the recording process in that way, where you’re almost building a sound collage around a song you wrote with just a guitar, the world opens up musically. The end result is still under the psych umbrella, but we hope it translates to something that transcends cliche and categorization.” Check out the EP’s single “Everlasting Moor” below.