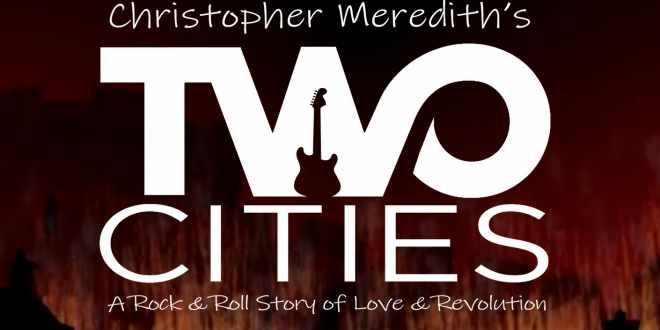 Christopher Meredith, a Nantucket Island-based musician, has released the double album rock and roll story of love and revolution, titled “Two Cities.” “Two Cities” is a stunning musical voyage that is sure to enchant listeners around the world. Charles Dickens’ classic novel “A Tale of Two Cities” served as an inspiration for the record.  In this project, Christopher performed and collaborated with various artists, including Tom Stoddart, Rachel Gavaletz, Kenny Howard, Jon Pousette-Dart, and many more. “Two Cities” features a narrator (Joe Butcher), a groundbreaking band, singers, and dancers, as well as a movable stage design, one-of-a-kind screen effects, and lighting. Christopher developed a video (can be found via https://www.2cities.net/) during the pandemic because he needed a visual demo after finishing the album and had no other resources available to him except the internet. The artist used SecondLife, a 3D virtual environment, to create a completely working theatre complete with sets and lighting and then made a film utilizing 3D avatars to demonstrate what this may look like as a live 3D presentation. “Two Cities” features twenty-six streaming narrated tracks, lyrics, and story pages, as well as twenty-six unnarrated mixes.

Christopher Meredith, a gifted artist in his own right, is one of a kind. Apart from being an accomplished composer, producer, performer, and innovator, he is the founder of Rockin’ Horse Productions LLC. Musical composition for theatrical workshop events has been his area of expertise too. Christopher Meredith has collaborated and performed on hundreds of music, dance, and theatre productions over the years and now works out of his self-designed and built home studio. In addition to performing original music in 3D virtual worlds, he has also acted as the live music director for Beacon films’ feature film “Grey Lady,” co-writing and producing “Keep Your Eyes on the Prize” alongside G Tom Mac. The musician plans to use all donations and sales of “Two Cities” proceeds to support the live event, create a 3D web theatre, and the first 3D presentation of the epic album. As a bonus, if you buy the double album and join his website, you’ll get a free ticket to his next online show.

“Two Cities” is now available on Christopher Meredith’s website. You can also visit his website for more information on his upcoming projects.

Stephen Vicino is the founder of MusicExistence.com. He created this site to give talented musicians a voice and a way to be discovered.
@@svicino
Previous Jarea Wilson Released Her Debut Single, ‘Love Needs An Answer.’
Next Toronto’s Lammping Releases 70’s inspired “Stars We Lost” EP