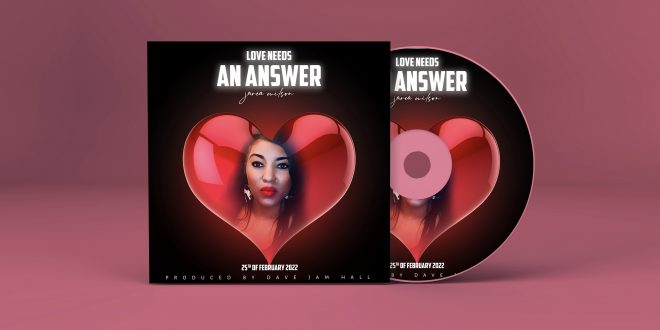 Alabama singer and songwriter Jarea Wilson has made a grand entry in the music industry with her debut single, ‘Love Needs An Answer.’ Freshly released on February 25,’ Love Needs An Answer’ is a beautiful offering by this talented artist. This four-minute song, which was produced by Grammy-nominated record producer Dave “Jam” Hall (Mary J. Blige, Madonna, Usher), is characterized by rhythmic melodies and soulful vocal performances. ‘Love Needs An Answer’ is a powerful mix of R&B and pop. The singer majorly focuses on heartbreak and the grief that follows in this song. Written from the heart, it will transport listeners into Jarea Wilson’s world and help them better immerse into her own experiences.

According to Jarea’s biography, she began her musical journey when she was just seven years old. Her parents have been quite supportive throughout her journey. She began taking piano lessons, which eventually led to her penning songs and singing while she played the piano. Besides being a singer, Jarea Wilson is a brand ambassador and the creative force of Quest Apparel Boutique, which seeks to inspire and motivate individuals in their everyday lives. She initially started her career as an office administrator at WJJN 92.1 and WAGF-FM 101.3, where she grabbed the notice of Jimmy Doctrie, the program director. After hearing about her and recognizing her potential, Jimmy connected her to Dave “Jam” Hall, which resulted in this fantastic project.

‘Love Needs An Answer’ is now available for streaming on all platforms, including Spotify. You can follow Jarea Wilson on Instagram to learn more about her upcoming projects.

Stephen Vicino is the founder of MusicExistence.com. He created this site to give talented musicians a voice and a way to be discovered.
@@svicino
Previous Ukrainian Dark Electro Band, BLAZERJACKET Speaks Of A Parasitic Society With New Video, “Get Out”!
Next Rockin’ Horse Production LLC Releases A Double Album, “Two Cities.”