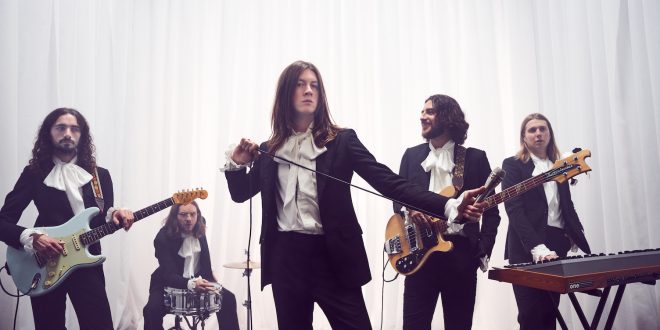 British band Blossoms have today revealed their brand-new track ‘Ode To NYC’ and its accompanying video, directed by Edwin Burdis. ‘Ode To NYC’ is taken from Blossoms forthcoming new album, Ribbon Around The Bomb which is set for release on April 29.

Speaking about the new track, Blossoms’ Tom Ogden reveals, “‘Ode To NYC’ is a love letter to my favorite city and is me imagining running around the city with my wife. It also feels like a love letter to her as well. ‘I get my kicks at West 56th, we’ll go sing Sinatra’ is referring to going to watch a tribute at the Carnegie Club which is on West 56th. That club is like something from a Scorsese movie.”

Currently gearing up to play a series of live shows and festivals in the UK this summer as well as a run of support dates with The Killers, Blossoms have also announced plans to return to the US with two shows confirmed in New York City and Los Angeles this summer. The band are set to play Irving Plaza in New York on August 16, followed by a show at Los Angeles’ iconic El Rey Theater on August 18. Tickets are on sale now.

These live dates follow successful SOLD-OUT headline runs in 2019 and 2017 — including critically acclaimed appearances at Coachella Festival in California and Lollapalooza in Chicago. For a list of all live dates and to buy tickets, please visit www.blossomsband.co.uk/tour/.