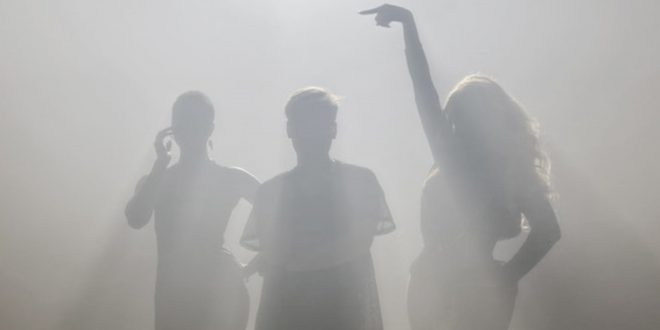 We are chatting with artists sora, Synamin Vixen, and Laveau Contraire! You released “Body Party” not long ago. We love it. Tell us how it all came about and the three of you working together.

sora: Hello! Thank you so much for having us, I enjoy it. Well, I guess I’ll introduce myself first. I’m sora, New Orleans’ premiere DIY pop star! Been making music for 10 years now and have no plans of stopping anytime soon.

Laveau Contraire: My name is Laveau Contraire, I’m the Voodoo Queen of New Orleans, here to put you all under my spell. I’ve been doing drag since 2015, and I am the mother of the Haus Contraire.

Synamin Vixen: Hi, I’m Synamin Vixen and I am the Synsual Spellcaster. I’m a performer, healer, writer, diviner, and your friendly neighborhood domme. I am the owner of Synsual Healing, where I offer a variety of services and herbal products for your personal healing. I’m here to cast sensual spells and to show you how to do it too.

s: So like Laveau said, she’s the mother of the iconic Haus Contraire, and Syn and I are the other two founding members, established in 2018. So we’ve been performing together and supporting each other for a few years now, with all of our separate and joint ventures. Laveau was the one that actually gave me my first drag booking (when my drag persona Cucci Licci came to be), and she’s such a great inspiration. Both Laveau and Syn, really.

LC: When sora asked us to be a part of a “Haus” track, it was an immediate yes for me. I love my performer family so it was a no-brainer for us to combine forces for this post-apocalyptic bop.

SV: Yeah, as a performer family, working together on projects is just what we do, so to be able to make that more visual and audible in a public way was a joy to share with the world!

s: Plus it’s our first track together as a family! I love telling people that I released a haus track (get it? Like a house track. I crack myself up), and it definitely is one of my fave releases to date.

What has been your favorite part of working together on this song?

s: It’s been a while since I’ve had the chance to practice choreography with a group, so being able to get back into that setting, and especially with new material and with new people, was especially thrilling to me.

LC: My favorite part of working on this song together was definitely the music video shoot. It was fun making the song, sure, but seeing it come to life visually after WEEKS of dance rehearsals and sora’s careful planning was so rewarding.

SV: And I got to live my dream of choreographing my first music video!

s: Synamin also teaches a few dance classes here, so you know I couldn’t not have her choreograph for “Body Party”.

Share with us about the inspiration for “Body Party” and why was it important for this to be a single you all released together?

s: Originally I was working on a different song a few years back that ultimately ended up being shelved, incomplete. I loved part of the verse that I wrote for that song though and didn’t want to let it go to waste, so I ended up taking it and thinking of how I wanted to restructure it. The idea of “body party” came to mind after seeing a tweet that talked about how rhyming was a funny thing. Put two and two together, and this club banger came together!

The more I worked on it, the more I realized this needed to be a group effort. I mean, it’s in the name of the song; can’t have a party with just one body right? I respect both Laveau and Synamin immensely as creatives, and figured this would be a perfect avenue for all of us to showcase our talents as well as push our creativity. Laveau wrote her own verse, and Synamin was in charge of most of the choreography as well as leading the dance rehearsals. The chorus part is definitely one of my fave parts; every so often I’ll break out into it because it’s so easily accessible. I even turned it into a dance challenge, in case you wanna try your hand at it. Everyone’s body parties differently, and I would love to see you rock it.

If you had to pick one, tell us your favorite song released in 2021!

s: I just caught K-Pop act LOONA’s most recent online concert, and it really reminded me how much I loved their Japanese debut single, “HULA HOOP”, which just came out last September, so that’s my vote!

LC: Is it too much to say “Body Party” by sora featuring Synamin Vixen and Laveau Contraire?

LC: If not “Body Party” then definitely “Dance Single” by sora

s: Y’all are so sweet *sniffles*. See why I love my Haus fam?

Thank you for your time today! Tell us when we can get the new single and where to keep up with you online.

s: Both Body Party and Body Party The Remix are out now on all major streaming platforms (Spotify, Apple Music, TIDAL, and many more), and the music video is out on YouTube too! You can find me on all socials (IG/TW/TikTok) at @soracalling, and if you do the #BodyPartyDanceChallenge make sure you tag us so we can see it and hype you up!

SV: And I’m @SynaminVixen in most spaces.

s: Thanks for having us, and talk to y’all soon!

Previous Single Review: Dennis J. Leise “I Only Do It Cause I Have To”
Next Live Review + Gallery: Killswitch Engage with August Burns Red & Light The Torch in Ventura, CA (02.21.2022)