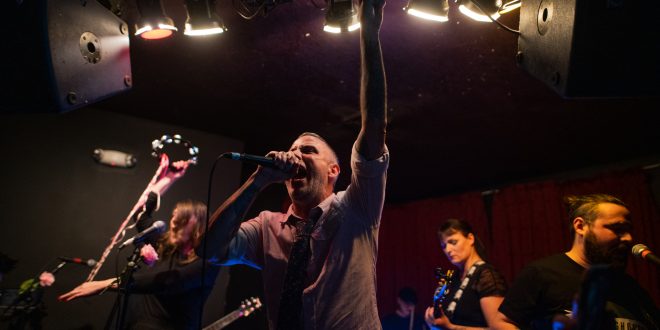 Editor’s note: Twenty-two years ago you would be hard-pressed to find someone in the skate punk/emo scene that didn’t own a copy of BoySetsFire’s seminal album After the Eulogy. The album put the Delaware-based outfit on the map and they never looked back. The group soon became well known for their melodic hardcore sound and politically themed lyrics with an edge of anger. Fast forward to the present and the band’s vocalist Nathan Gray is still angry and still pushing the same ideals from those albums back in the 00’s. His latest solo record, Rebel Songs, which came out in December has lead him to head out on tour in support of the album. Performing live as Nathan Gray & the Iron Roses, he was in Boston, MA on Saturday night doing just what he’s always done, playing loud, fast, sweaty punk shows. Check out photos from the gig below.