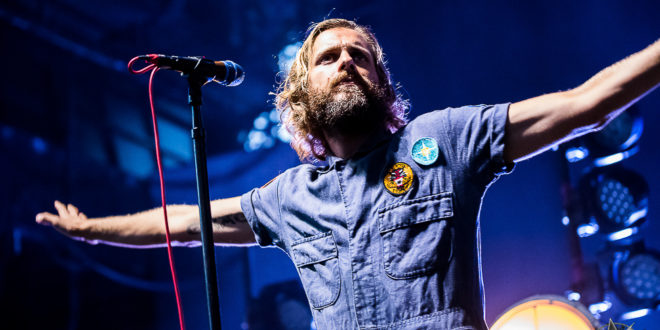 Diamond-selling recording act AWOLNATION today announced the tracklisting for their upcoming covers project My Echo, My Shadow, My Covers and Me, now available for pre-order, which will include collaborations with Beck, Jewel, Portugal. The Man and more. Today they also released “Beds are Burning (Featuring Tim McIlrath of Rise Against),” a new track from the album.

Marking today’s release, Bruno gave a statement on what this song means to him, “Ever since I was much younger, I would sing along to this song. The singer may have the coolest dance moves in music video history. I think this song speaks for itself in terms of the message and meaning of the song. I was excited that Tim from Rise Against performed on this one in particular, given the power and influence his lyrics and music have had for so many years.”

The album, which is set for a May 6, 2022 global release, is a fiercely collaborative and celebratory project, a collection of masterfully crafted and carefully curated covers, with each track featuring at least one acclaimed musical artist with whom AWOLNATION’s founder Aaron Bruno has a personal connection. After crossing paths over the years at festivals and other shows, the band joined forces with Tim McIlrath of Rise Against to give a futuristic, raw, and gritty twist to the 1987 Midnight Oil classic. See the tracklisting below. Pre-order the album across platforms starting today HERE.

McIlrath said of the collaboration, “When I met Aaron years ago at one of our shows at the Coliseum in L.A., he disclosed his past time spent in hardcore bands, and we bonded over that. I’ve always been a fan of his, both as a person and his music, so it was an easy decision to guest on his version of Midnight Oil’s ‘Beds Are Burning.’ It didn’t hurt that I also love the song and all it stands for. I’m really impressed with the ways in which he made it his own because it’s not an easy song to reimagine.”

Originally recorded by Midnight Oil, drummer Rob Hirst gave their stamp of approval, stating, “A tough new light on our old song! The whistle near the end is a deft touch…congrats AWOLNATION and Tim on doing a brilliant job!”

To follow the covers project, AWOLNATION is currently working on a new album with original music, after most recently celebrating the 10th anniversary celebration of the group’s platinum debut album Megalithic Symphony, which spawned the rare DIAMOND-certified “Sail.”

My Echo, My Shadow, My Covers and Me Tracklisting

Previous Gallery: Underoath, Spiritbox, Bad Omens at The Van Buren in Phoenix, AZ (02.23.22)
Next Single Review: Dennis J. Leise “I Only Do It Cause I Have To”